Understanding The Difference Between A Database & Blockchain

CoinSutra » Blockchain » Understanding The Difference Between A Database & Blockchain 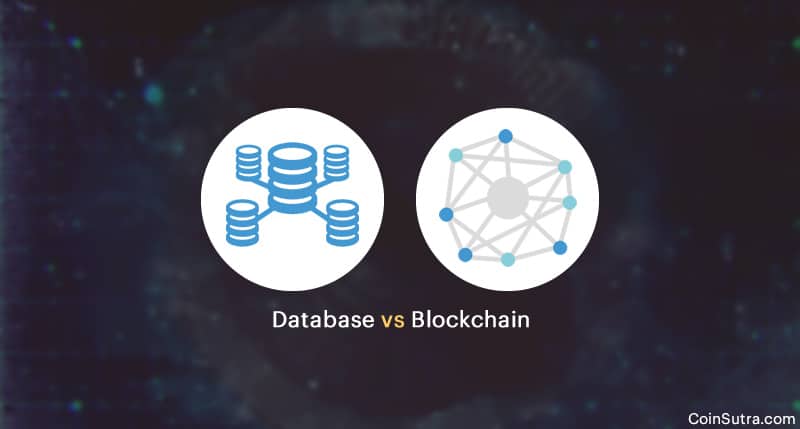 Did you know that a blockchain and database are two different things? I ask that because many consider blockchain similar to a database but it is much more than that.

Of course, a blockchain is a form of a database, a distributed database. I know some of you might get curious when I say ‘distributed’ & ‘database’ together.

Let’s keep this curiosity alive for I am going to highlight today the difference and similarity between a database and a blockchain.

What Is A Blockchain?

A blockchain is a database or a ledger that is distributed.

It is a DLT or distributed ledger technology that the world had not seen before it was introduced to us by Satoshi Nakamoto’s creation of Bitcoin only in 2009.

The underlying technology behind Bitcoin is ‘the blockchain’.

On CoinSutra we have discussed blockchain in detail in the past: The Ultimate Guide To Understanding What A “Blockchain” Is & How It Works.

But for the uninitiated, I will give a brief introduction again.

A blockchain is a distributed ledger that can be used between parties that don’t trust each other with data.

It is so because adding something to the blockchain requires works to be done.

For example, in the case of Bitcoin blockchain, blocks are added to the chain in every 10 minutes by the miners with cryptographic proofs and timestamps. But let’s not forget that this process makes blockchains very slow.

These cryptographic proofs and timestamps along with proof of work ensure that no one can edit that data without putting a significant amount of work. Moreover, adding transactions with timestamp creates an immutable history which can be verified by anyone.

Through a blockchain, the provenance of digital records becomes easy and transparent.

One can see when a digital record was created (origin), ownership of records with timestamps, and its present status, like we have in the Bitcoin blockchain.

On the Bitcoin blockchain, you can actually see the origin of a particular BTC, and how many times it was transacted between different addresses, and which address actually owns that BTC.

This type of distributed ledger or database can be very helpful between parties that don’t trust each other and yet want to transact with one another in a fair and non-centralized way.

Lastly, in the blockchain architecture, anyone can write digital records to the blockchain by putting a significant amount of work called proof of work, so there is no centralized agency for writing on a blockchain.

What Is A Database?

Databases are a kind of central ledger where you trust the administrator to manage it well.

Of course, the database administrator gives provides rights to read or write, unlike blockchain where anyone can do so by doing the significant amount work in a correct way.

But like blockchain, modern databases can store history and different versions of data but to an extent with the help of a centralized trusted entity.

And because they are centralized in nature, their maintenance is easy and their output is high. But this also brings in the drawback of trusting a centralized entity which when corrupted can compromise the entire data and can even change the ownership of digital records.

Also, there is no need to keep all the previous versions of the ledger because we all trust the centralized authority by default and they ought to act fair, which in the real world, is far from reality.

In such a system it is easy to pirate the digital records and hence cannot solve problems like double spending.

I don’t want to draw home the message that centralized traditional databases are useless or bad. Instead, I want to show that both types of ledgers can be used for different purposes.

For example, wherever we need provenance and immutability, we can use ‘the blockchain’. When we need high performance and confidentiality, we can use traditional databases.

3 thoughts on “Understanding The Difference Between A Database & Blockchain”