Bitcoin Gold Fork Coming: How To Double Your Bitcoins 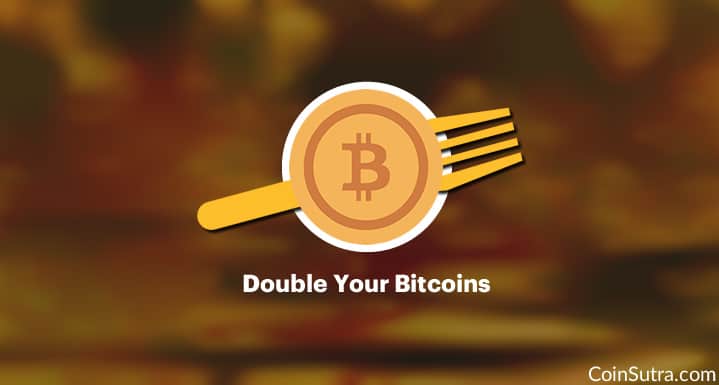 It has been only 9 weeks since the Bitcoin Cash hard fork, and we are again discussing another Bitcoin hard fork.

For those of you who don’t know about the previous Bitcoin hard forks and its challenges, read my earlier guides here:

And for those of you who aren’t aware of the upcoming Bitcoin hard fork, pay attention.

In this article, I intend to cover everything you need to know about the upcoming Bitcoin hard fork and how to prepare and benefit from it by doubling you coin holdings.

Some of you may think this is a good thing as your value will also double!

Note: Doubling of coins does not mean doubling of value, because after a hard fork, the value of both versions of coins are determined based on user sentiments and demand/supply in the market.

So keeping that point in mind, let’s get started…

Bitcoin Gold is a new, would be cryptocurrency denoted, as of now, as BTG or “bgold”. It will be a fork of the original Bitcoin that Satoshi Nakamoto invented in 2008.

The Bitcoin Gold community defines BTG in the following fashion:

At present, there is very little information available about the technical know-how of this fork because their website is under development.

Who Is Doing This Fork And When Is It Happening?

The Bitcoin Gold project is being driven by some developers, miners, and their head Jack Liao, the CEO of the  Hong Kong-based mining equipment manufacturing company, LightningAsic.

Bitcoin Gold’s lead developer is someone anonymous by the name of h4x3rotab and he/she claims that:

As per their official website, the exact time is not yet known for this fork.

Why Is It Happening?

This is a community-driven hard fork without any consensus voting. It is primarily being driven by a few who believe that the original Bitcoin mining system has become centralized and is monopolized by a handful of mining companies.

They believe this because of ASIC miners which provide a very strong entry barrier for an average user or miner like you and me.

And now, these hard fork supporters want to change that and make the process more decentralized.

How Do BTG Supporters Want To Change This Centralization Problem?

BTG (i.e. Bitcoin Gold) advocates have decided to solve this problem by forking Bitcoin on 25th October by changing its original protocol.

Specifically, to combat the mining centralization problem, the BTG developers are implementing a different mining algorithm altogether that will be resistant to ASIC chips called Equihash.

This will make ASIC miners irrelevant for mining Bitcoin Gold because, with the implementation of Equihash, Bitcoin Gold will be mineable simply by using cheap GPUs.

What’s Their Other Agenda?

Their other agenda is to save Bitcoin in case something happens to it in the future, as they claim will.

Also, I think they want to compete with other GPU minable cryptocurrencies like Zcash, Ethereum, and Monero.

And with Ethereum moving to POS consensus, this is a kind of masterstroke for this Bitcoin-branded coin (BTG) because then those Ethereum mining people will have to switch to either BTG or Zcash or another GPU minable currency in the future.

But they know that they are not competing with Bitcoin and Bitcoin Cash as stated by their lead developer in a conversation with Bitcoin.com.

Bitcoin Gold doesn’t bring many features with it, but…

Apart from these, there will be no changes like block size adjustment.

And BTG will be following the suit of the original BTC core developers for the future betterment of their coin because they believe that’s the secure way.

I have mixed feelings toward this because of several reasons…

It’s a good idea to have a GPU-minable algorithm. This will surely prevent centralization and currently, there is no GPU-minable Bitcoin hard fork. So it’s good in that sense.

On the other hand, their development and way forward look depressing. There is literally no information whatsoever on their GitHub or official website. Moreover, on GitHub, none of their developers are publically available.

Also, haywire information sources on the Bitcointalk forum raise massive red flags about their future and their intentions. I was really surprised to learn that they might have an ICO for these pre-mined blocks, but again, there is little clarity about it on their official website.

But… let’s say that around 25th October they have beaten all odds, clarified the much-needed information about their project, and we have a fork… then what to do in that case?

Then the only thing to do is enjoy and claim your free airdropped Bitcoin Gold coins!

Confession: I am going sell some part of BTG immediately (if a fork happens) and will HODL the rest of it.

How To Get Free BTG

One month until #bgold exodus fork.

After the BTG fork, you need not do much, but you need to be updated and agile about this subject.

If you want access to your BTG coins, you need to take care of two things:

And here’s the important part: Both of your coins (BTC and BTG) will have the same private keys.

Moreover, due to this fork/split, another problem called Replay Attacks can happen.

Though, they say that they have replay protection in place, but we are not sure how effective it is as it has not been tested live.

So to avoid replay attacks and access your free BTG coins, we suggest you take care of the following things:

The future of BTG isn’t clear yet. But if the fork happens, BTG will likely have some market value and will definitely steal away some hash power from GPU miners.

On the other hand, we really need exchanges and wallets to support this Bitcoin Gold fork; otherwise, it will have a hard time finding any value.

And as the fork time approaches, I will keep updating this article will more information on Bitcoin Gold and which wallets/exchanges are actually supporting it.

Last but not least, don’t fall prey to fake websites/wallets demanding your private keys to let you access your BTG.

So until that time, stay tuned to CoinSutra to keep up with the Bitcoin revolution!

Note: Theoretically Bitcoin Gold Fork is already done around October 24, 6 am UTC at block height 491407. So if you are transferring your BTC now, here and there then you might not get BTG because it’s over now. Regarding claiming your BTG through wallets we will publish further instructions shortly. Happy Forking 🙂

The Bitcoin Gold dev team is not holding any information back. We are committed to full transparency.
We do answer all of the questions that are being asked via Twitter, Facebook, Slack, and email, and we
provide all the needed information for the general public.
We don’t hide that we are working hard to provide this solution – to make cryptocurrency that has the
Bitcoin structure and that cannot be mined using ASIC machines. Our project is almost ready, but there
is still a lot of work to be done and we will give all the support if there are people who want to help us.
We don’t make suggestions to buy or not buy any kind of cryptocurrency, especially not Bitcoin Gold
(BTG), as all cryptocurrency markets are still highly volatile and easily manipulated. But the one thing
that you must know is that on October 25, as planned, we will take a snapshot of the Bitcoin blockchain
and everyone will receive 1 BTG free for every 1 BTC in their wallet. So please be sure to keep your
Bitcoin private keys secure in your own possession, as we don’t want any Bitcoin holders to miss out.

230 thoughts on “Bitcoin Gold Fork Coming: How To Double Your Bitcoins”