If you own cryptocurrencies and an iOS device, I am sure you have struggled to find the right crypto wallets. However, these days developers have started supporting iOS devices too.

Now the iOS device users no longer need to store their cryptos on exchanges and jeopardize the security of their cryptocurrencies.

Also, in any case, the habit of storing your cryptocurrencies on exchanges is strongly discouraged by CoinSutra. But we also understand that some crypto users are forced to do so because they don’t know about cryptocurrency wallets that are supported on iOS devices.

That’s why in this post I am going to share about popular Bitcoin and cryptocurrency wallets that can be used on iOS devices too.

BRD is easy to use and is a secure Bitcoin wallet through which you can send/store/receive your bitcoins easily.

The UI is sleek and streamlined for beginners as well as advanced users and provides a very good user experience.

The good thing is that it is available for iOS version also where users can get started in seconds as there is no registration or signups required to use this wallet.

Some of its notable features are of this wallet are:

Also, BRD wallet supports segwit addresses which are very good for reduction of transaction fees while transacting in BTC. 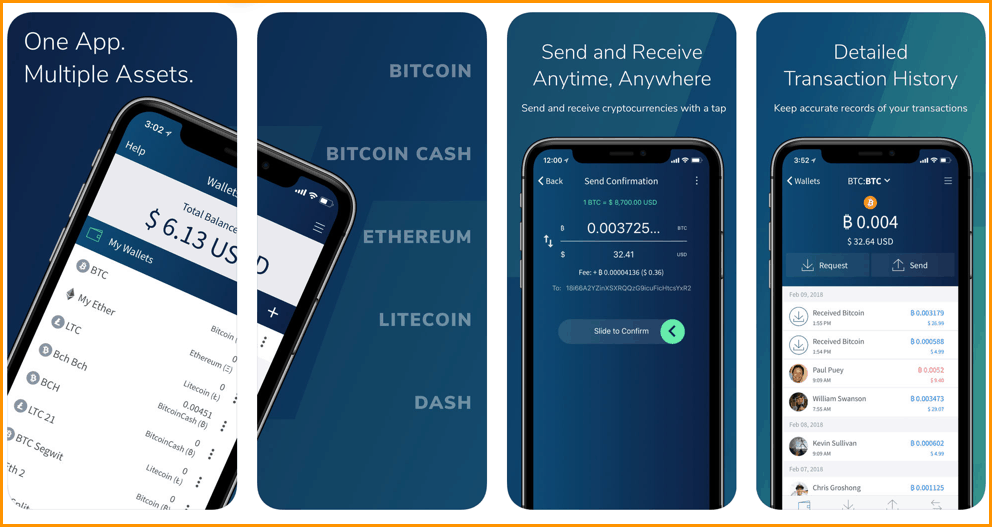 Edge (Formerly known as Airbitz) is also a non-custodial HD wallet just like other popular HD wallets and has a very good development community backing it since 2013.

Edge’s iOS version Bitcoin wallet is one of the oldest in the market and has pretty decent reviews. I have never used it but it always remains on my mobile as an emergency backup wallet that I can use anytime. Its security features are a step ahead than its peers. Some of its notable features are:

Note: This wallet is available for iPhones and iPad currently. 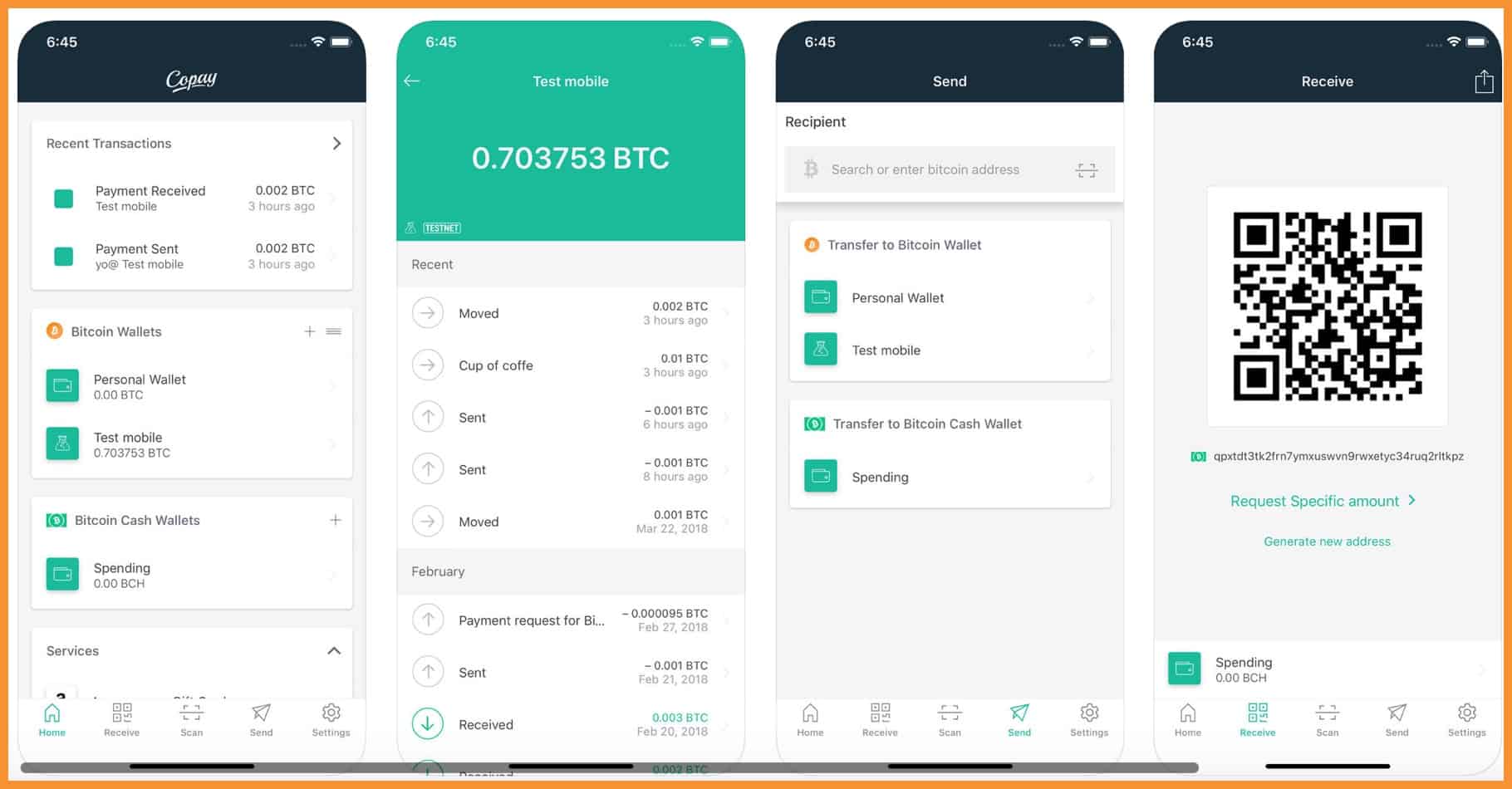 Copay is a product of BitPay, a long-time operating Bitcoin company in the cryptosphere.

Copay is a non-hosted HD wallet that is very easy to use and is under continuous development/maintenance of a strong development team.

There are some USPs of this wallet that allows one to store their Bitcoin and Bitcoin Cash in a hassle free way.

Note: This wallet is a Bitcoin & Bitcoin Cash-only wallet available for iPhones and iPad currently.

4. Jaxx Blockchain wallet for iPhone (# No Segwit Yet) 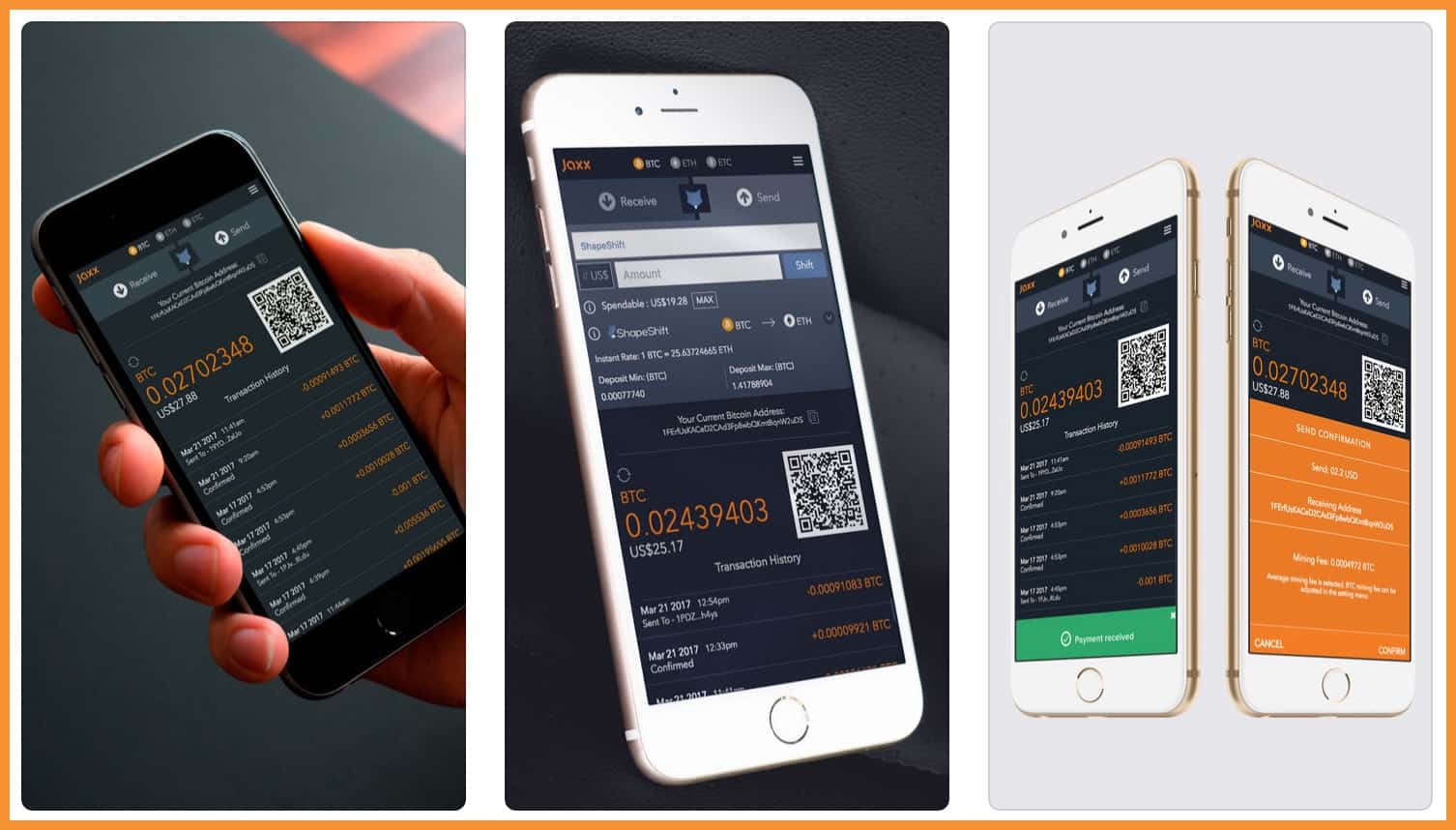 Another fine wallet for Bitcoin and other cryptocurrencies is Jaxx.

Jaxx is a multi-cryptocurrency wallet with an active development community behind it and has all the features that one requires in a non-hosted wallet such as:

Jaxx has had its fair share of controversies, particularly when they were found keeping user’s mnemonic phrases in plain text, but that has changed now.

Note: It supports more than 25 cryptocurrencies (including Bitcoin) in its current iOS version.

Bitpie is another popular Bitcoin wallet that has started getting a lot of traction.

I noticed this wallet while recovering forks of Bitcoin like SBTC and Bitcoin Diamond. Ever since this wallet is on my Android device.

However, the good news is, it is an HD wallet that now supports multiple currencies on the iOS platform too.

While using Bitpie you have access to the following features:

Note: It supports BTC, ETH, LTC, EOS, QTUM, and ZEC as of now on its Android version and BTC plus BCH on its iOS version.

Blockchain wallet is the oldest cryptocurrency mobile wallet available in the market and luckily they have the iOS version for you.

It is, without a doubt, the world’s most popular mobile wallet for storing Bitcoin with more than 23 million users.

It is an HD wallet that comes with all the regular features that one might want in a self-hosted wallet. Some of the features that keep you in charge of your crypto funds all the time are:

Always remember: If you lose the 12-18 seed words, you will lose your all bitcoins.

Note: It is a Bitcoin-only wallet and doesn’t support other currencies currently.

Trust wallet is another multi-currency wallet for iOS users but this wallet doesn’t support Bitcoin.

Trust wallet is the wallet for Ethereum and Ethereum based ERC20 tokens and ERC223 tokens. Here in this wallet your private key is only stored locally and protected with many layers of security.

Trust wallet also acts like a Web3 Browser that allows you to interact with decentralized applications (DApp) directly from the app.

The Best Ways To Store Cryptos

The best and easiest way to securely store your cryptocurrencies is to use a good wallet that you control on your device.

If you store your cryptos on exchanges, you stand at the risk of losing all at once. And as the cryptosphere has matured, even iOS users have a lot of options for crypto mobile wallets.

Also, whenever you use any of these iOS wallets, we suggest you follow the basic security practices always, some of which are:

I will update this list on a regular basis so watch this space. Some of the iOS wallets that I am watching now are:

Do let us know which wallets you use in the comments section below.

Here are hand-picked guides for you to read next: