What Is Atomic Swap and Why It Matters? [Must Know]

CoinSutra » Bitcoin » What Is Atomic Swap and Why It Matters? [Must Know]

Imagine what it would be like if the trading cryptocurrencies had no trading fees and there were no exchange hacks!

Surreal? Well, no. No trading fees and no exchange hacks are soon to happen in the real crypto world!

I would also like to tell you that in this cryptosphere, the stories of exchanges being hacked are not new. Such incidents mainly happen because there are centralized exchanges that provide trading services.

To make all of this possible, a new technology called atomic swaps has come in which will make this cryptosphere safe and more mature.

What is Atomic Swap?

Atomic swap is a cryptographically powered smart contract technology that enables two parties to exchange different cryptocurrencies/tokens without the risk of one party defaulting on the trade.

The real beauty is, this exchange/trade between involved parties can happen in a trustless manner without depending on a third party or an escrow manager plus there is no default risk on either side.

Simplistically, in this type of exchange, no party can run off with the other party’s money before the trade is complete and this is ensured by the cryptographically powered smart contracts of atomic swaps.

In computer science, it is called atomic because the trade happening is whole/indivisible, unlike the one we have on centralized exchanges or escrow manged exchanges like Local Bitcoins.

Therefore, while engaging in an atomic swap, the trade will either happen and both parties will receive their respective coins or the trade will not be successful. In other words, there is no middle ground involved in executing the atomically swapped trade.

Atomic swaps are also often called cross-chain atomic swaps, meaning, two different cryptocurrencies that are present on different chains can be exchanged atomically without any trusted third party and there is no exchange/trading fess involved in this.

Note: Different businesses that implement this technology can add a fee structure for providing this service because these swaps can only be done by command line and are not as user-friendly as you would expect. But even if businesses charge you a small fee, it will be safer than trading/exchanging on centralized exchanges.

To get into the technical details of how the whole process takes place cryptographically, read more about atomic cross-chain trading.

Why Atomic Swap Matters to the growth of Cryptocurrency Industry

Atomic swaps open up a whole new way of looking at crypto trading. This technology can be used when two parties have to make a very large or a very small OTC trade.

Imagine you need to exchange 1000 BTC with 50,000 LTC. I am sure you would neither use a centralized exchange that is prone to hacks nor will you trust an escrow manager.

These swapped transactions if done, would happen on-chain and hence would be subject to all the limitations that both involved chains already have.

For example, in LTC/BTC atomic swap, the miner’s fee on respective blockchain would be deducted and the transaction completion times can be subject to Bitcoin’s mempool size at the moment of atomic trade.

There are few popular atomic swaps that have happened so far some of them are such as:-

Litecoin and Vertcoin Atomic Swap were done in the same month but it is still at work.

I'm going to do an on-chain atomic swap of 1 LTC for 55 VTC with @jamesl22, lead dev of @Vertcoin. Will it work or will the it explode? 😂 https://t.co/AC0CqKHDbZ

Where Are We In Atomic Swaps

Atomic swaps are still a new thing. That is why they are still being discussed, refined and tested. In a crisp sentence, they are not yet mainstream.

There are also certain limitations of on-chain atomic swaps such as:

These limitations are huge barriers to mainstream adoption but you need not worry because the cryptosphere industry is well aware of all these limitations.

Today we're excited to announce the first ever Lightning cross-chain swap from Bitcoin to Litecoin!⚡️⛓️💱

As far as the future of atomic swaps is concerned, it is safe to say it looks bright.

Another thing that these atomic swap services will focus on will be the user experience, failing to which it would be too difficult for non-techies to use this.

Some services such as Komodo’s Atomic Swaps which work differently, and Altcoin.io’s tests on ETH/BTC atomic swaps, are still in the nascent stages. However, the preview of the Altcoin interface looks super neat: 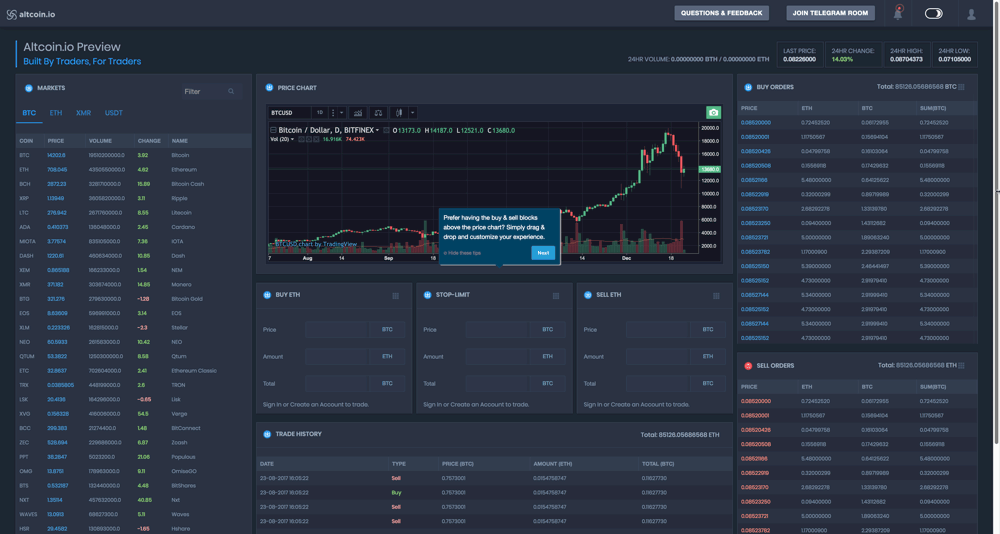 In the end, however, it would be interesting to see how it plays out and hits mainstream because this technology has the potential of making services like Changelly/ShapeShift.

That is all I have to say about the atomic swaps in this article. I will be back with another article on atomic swaps and talk about different types of atomic swaps that are being tested.

Until then, stay connected and keep learning about the cryptocurrency and blockchain revolution with CoinSutra.

It would be great to hear from you:

5 thoughts on “What Is Atomic Swap and Why It Matters? [Must Know]”