Are you investing in cryptos?

Are you a Bitcoin millionaire?

Have you made decent money out of the ongoing crypto boom?

If your answer to one of these questions is YES(!!), then you should also know that you can be broke soon.

If you don’t understand what I am talking about, then you need to read some of my previous write-ups:

In all the above articles, I have been quite vocal about owning your private keys, and I have pointed out this very important fact:

But still, many users remain ignorant of this basic fact, and they lose their cryptocurrencies on centralized exchanges and hosted hot wallets.

That’s why today, I want to tell my readers about some of the biggest Bitcoin hack incidents that have happened in the history of cryptocurrencies. This will make you aware that THESE THINGS HAPPEN.

It’s always good to learn from historical events because I agree with what Winston Churchill once said:

So in the hopes of securing our future by learning from the past, let’s get started… 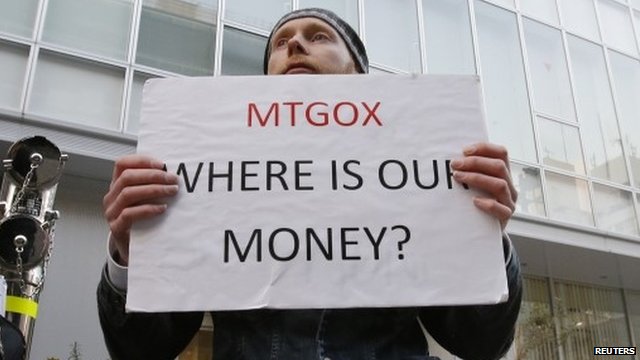 Mt.Gox is the most famous Bitcoin hack.

But very few know that this big exchange was not hacked only once, but twice.

The first one happened in June 2011 when the hacker was able to get ahold of Mt.Gox’s auditor’s credentials and transferred 2609 bitcoins to an address for which Mt. Gox had no keys. This led to the suspension of Mt. Gox operations for several days; but they sustained themselves in the market, and they were able to regain the trust of users.

The second attack happened in 2014, at a time when Mt. Gox was handling almost 70% of Bitcoin transactions in the world. This time, the leaked BTC amount was humongous enough to completely sink the business of Mt. Gox.

Soon after that, Mt. Gox halted operations and filed for bankruptcy, stating that more than 750,000 BTCs (around $350 million) were missing from the exchange.

Sadly, investors lost their funds and no refunds were made.

Another old-time Bitcoin exchange was hacked in 2012 when hackers were able to get ahold of the unencrypted private keys that were kept online for backups. The amount stolen at that time was “small” – i.e. a total loss of 24,000 BTC.

Though BitFloor was able to refund its users, it was closed due to bank regulatory measures as stated by its founder.

I am sorry to announce that due to circumstances outside of our control BitFloor must cease all trading operations indefinitely. Unfortunately, our US bank account is scheduled to be closed and we can no longer provide the same level of USD deposits and withdrawals as we have in the past. As such, I have made the decision to halt operations and return all funds. Over the next days we will be working with all clients to ensure that everyone receives their funds. Please be patient as we process your request.

Poloniex, which is one of the busiest exchanges of Bitcoin and altcoins, was hacked in the summer of 2014. The exact number of Bitcoin lost was not shared by the company, but a detailed explanation of the hack was given on the Bitcointalk forum.

Basically, the hackers were able to exploit a faulty withdrawal code of Poloniex.

Soon after the hack, Poloniex suspended operations for some time and declared in the forum that funds of all Poloniex holders would be reduced by 12.3%. This was done because many users would have simply withdrawn their funds and there would have been none left for the remaining 12.3% of owners.

Poloniex still runs smoothly to date, and all the users who lost their money were repaid by Poloniex, as claimed by the company and simultaneously verified by its customers.

But Poloniex has been under the radar of hackers quite a few times, and some unofficial source like this, this, and this have also claimed that it was hacked in 2017.

On 4th January 2015, the operational hot wallet of Bitstamp announced that it was hacked by an anonymous hacker and 19,000 bitcoins (worth of $5 million) were lost.

Soon after the incident, Bitstamp suspended operations with this notice: 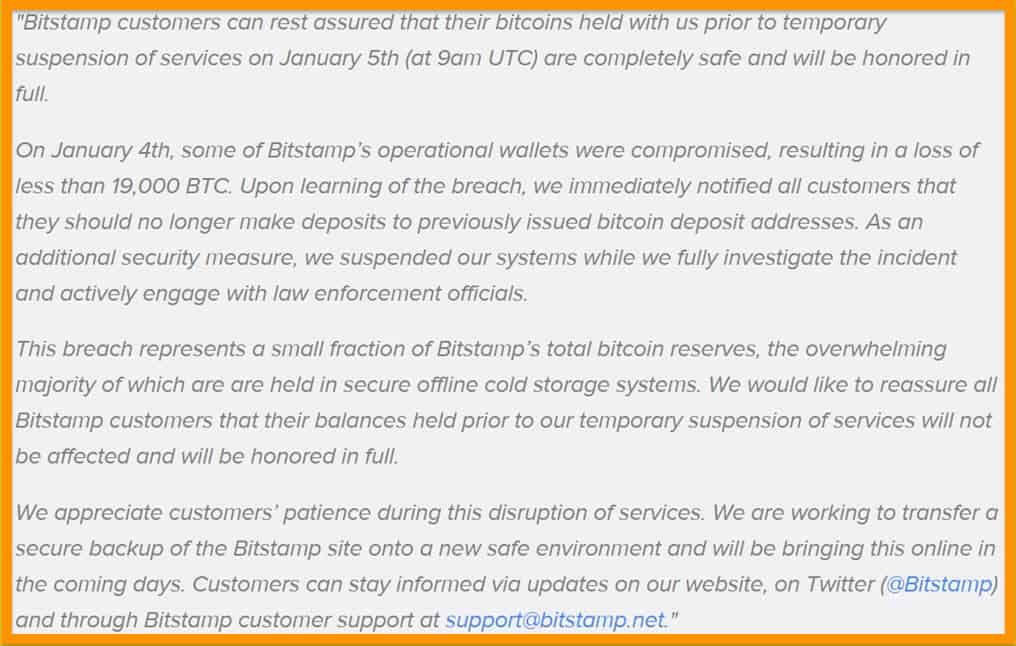 Bitstamp still continues to operate and has been able to win back the trust of users. Since the hack, it has acquired stringent security measures like BitGo multisig wallets for operational purposes.

This was the second largest Bitcoin hack ever made after Mt.Gox. The breach claimed 120,000 BTCs (worth $72 million).

It happened because attackers were able to exploit a vulnerability in the multisig wallet architecture of Bitfinex and BitGo.

But the good thing was that Bitfinex issued BFX tokens for victims that were redeemable in USD, and hence, most of their investors were refunded their money back slowly and steadily as per the below schedule.

Bitfinex continues to operate and currently has one of the heftiest volumes on BTC/USD pairs in the crypto world. 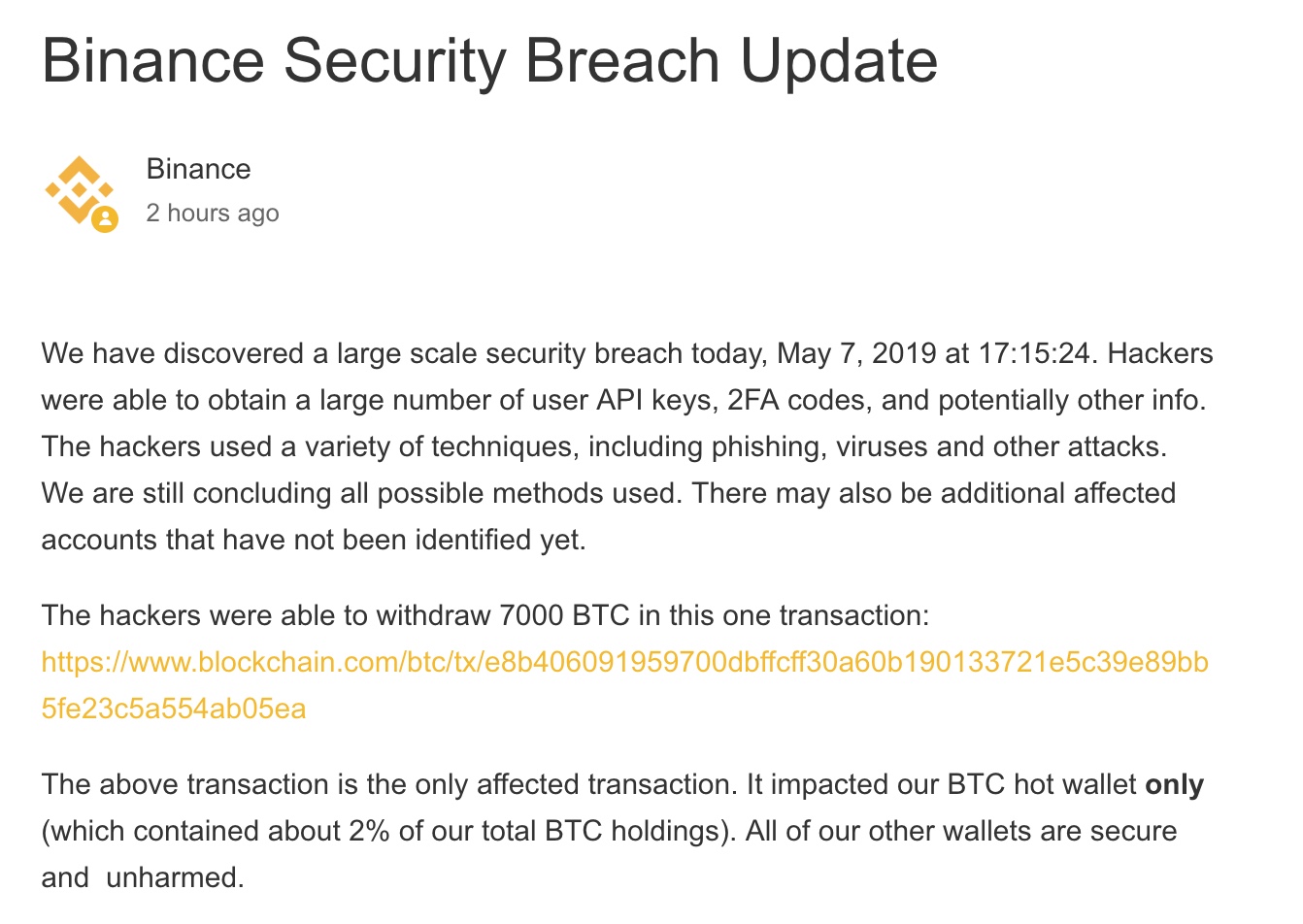 Binance is most popular exchange in 2019 and on 7th May 2019, Binance was hacked to lose about 7000 Bitcoin. This was worth about $40 million at the time of the hack. However, the team announced that they will cover all the lost funds from their funds and no user will be impacted from this hack.

“We have discovered a large scale security breach today, May 7, 2019 at 17:15:24. Hackers were able to obtain a large number of user API keys, 2FA codes, and potentially other info. The hackers used a variety of techniques, including phishing, viruses and other attacks. he hackers were able to withdraw 7000 BTC in this one transaction”

Moral Of The Story

Some more hacks that you should by its timeline are as follows:

So the moral of the story is to keep your cryptocurrencies under your control and not on centralized exchanges.

I am saying this because most of these hacks happened because private keys were handled carelessly.

I do understand that in the early days of Bitcoin people didn’t have that much knowledge about this stuff. But now, there is lots of educational material available about private keys and hardware wallets like the Ledger Nano S.

And CoinSutra is a part of that educational endeavor. So stick with us and you’ll be just fine!

Did I miss any major hacks? Let me know about them in the comments!

Here are a few more hand-picked Bitcoin security articles for you: