The Future Of Dogecoin: Is it worth investing in?

CoinSutra » Cryptocurrency » The Future Of Dogecoin: Is it worth investing in?

The crazy crypto world is becoming even crazier.

ICOs are on the verge of bubbling up, and insane amounts of money are flowing into almost anything and everything.

Doesn’t it remind you of the pre-dot-com bubble, when every company’s shares went skyrocketing in price? And we all remember how that one ended…

But even though the majority of “dot-com” companies crashed hard, some giants, like Amazon and eBay, were clear victors.

It would appear that the same thing is happening now with all of these well-funded ICOs.

Most ICOs make dubious claims as to what their tech can (or will be able to) do, while many of them claim that they are “what Bitcoin should have been”. And most of them will fail.

Now before you go thinking that I am against ICOs or Bitcoin alternatives (altcoins), I definitely am not.

In fact, I am positive that some of the cryptocurrencies which will soon rise to power are going to be bigger than Amazon and eBay.

But putting aside ICOs for a minute, let’s talk about an altcoin that has been around for a while – Dogecoin.

So let’s get started…

Dogecoin is a cryptocurrency like Bitcoin which was created out of an internet meme.

Yeah, it’s quite wired, at least it was to me when I first got to know about Dogecoin. It’s also quite funny, like, why would someone create a cryptocurrency out of a dog meme?

Jackson Palmer introduced Dogecoin to the world in December 2013. Since then, Dogecoin has seen both bullish and bearish markets and has simultaneously earned a reputation as a “tipping” currency – meaning you can tip someone instantly using Dogecoins instead of valueless upvotes, likes, and re-tweets.

Dogecoin is famously known as the “joke currency”.

Palmer did indeed found the cryptocurrency as a joke, but he did so under the motivation of many people who re-tweeted Jackson’s idea several times.

Check out this short video on Dogecoin:

Dogecoin has been around since 2013 and has a pretty well-developed community.

So let’s analyze Dogecoin’s BitcoinTalk, Reddit, GitHub, and Twitter communities to get a grasp on how much is left in this project.

Bitcoin Talk Forum – Dogecoin started off with an announcement on the BitcoinTalk forum. It is no longer an official channel of communication, but you will find the community is still very active there. You can always find some Dogecoin believers/non-believers discussing this crypto’s future.

Here’s a recent one:

So needless to say, many people on this forum have many different opinions…

Dogecoin Reddit – If you go to Dogecoin’s Reddit channel, you will find a decent amount of traffic. Community members are commenting and posting about once every 3 or 4 hours. This is a good sign.

Moreover, apart from bearish and bullish statements of Reddit users about Dogecoin, you will also find links such as this, this, and this which say that Dogecoin is actually being used in commerce and fundraising.

You can see the downtrend: 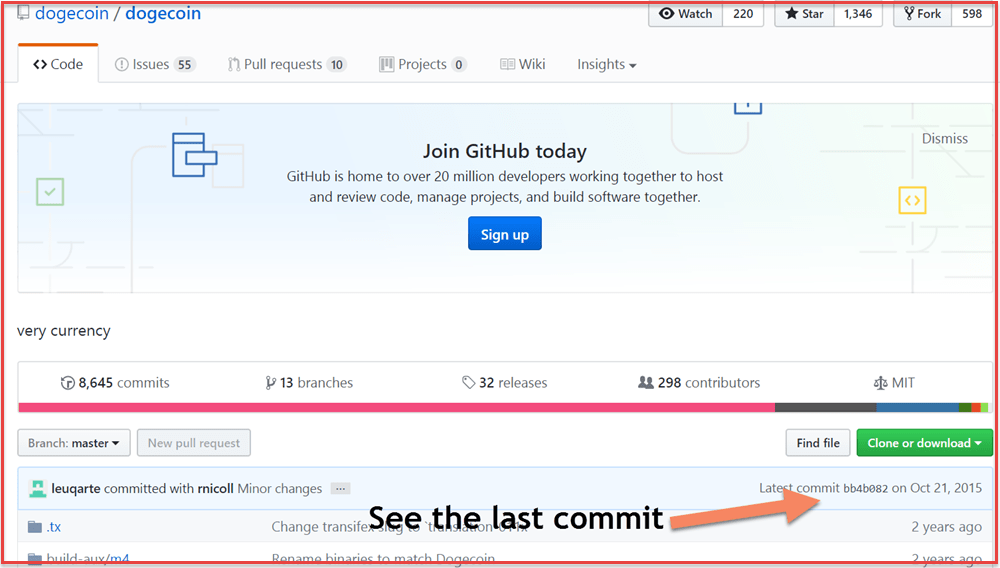 There has been no technical updates or development since 2015, and this shows how stagnant the coin has been since Jackson Palmer left the project by declaring that he was going on an “extended leave of absence”. 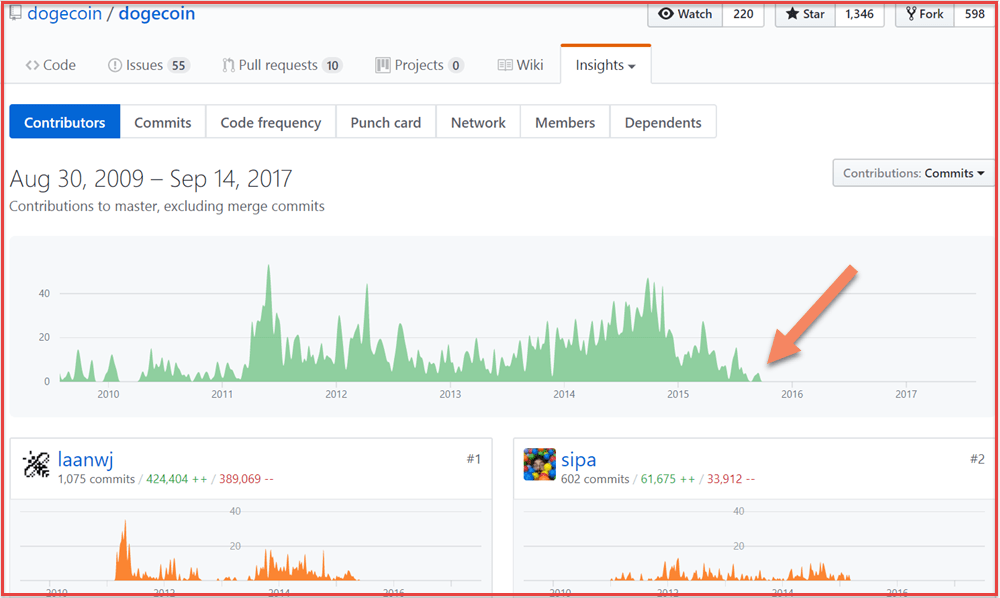 Dogecoin Twitter – Dogecoin’s Twitter handle @dogecoin also tells us a similar tale of stagnation. During the initial days of Dogecoin, you would find 3-5 tweets in a day, sometimes even more. But now, you will maybe see 1 tweet every 7-10 days, which is pretty unusual in the crypto space.

This stagnation is a likely indication of lost interest and lack of direction.

Unlike Bitcoin’s deflationary model, Dogecoin is an inflationary cryptocurrency. It has a quite high inflation rate as well as an extremely large and uncapped coin supply.

Here is their block reward schedule:

So as you can see, Dogecoin has already hit the 600,000th block in February 2015, and ever since then, they have been injecting 5.2 billion coins into the market each year (over a 4.5% inflation rate).

My Take On The Future of Dogecoin

I personally do not suggest investing in Dogecoin for the following reasons:

All these things aside, the original idea was a joke. It was meant to be a funny thing that had a lot of inside references to culturally relevant (at the time) things. For instance, the inspiration to have a coin supply of more than 100 billion came from a movie.

As a general rule, I don’t usually recommend investing in something that is openly a joke.

But it certainly doesn’t mean that Dogecoin is dead; there is still a thriving Dogecoin community. Even Coindesk captured some of the comments of existing Dogecoin dev team members which clearly indicated that as long as people are willing to engage with, learn about, or buy things using Dogecoin, it is not going to die.

I also feel that it is a great tool for tipping, and for those who haven’t used cryptocurrencies before, it’s a great way to start experimenting. Dogecoin is very cheap – around $0.0009 at the time of this writing – so buying 1000 Dogecoin only costs about $1.

But ultimately, the decision is up to you.

If you want to still invest or try out Dogecoin, you can do so by exchanging any other currency for Dogecoin from CoinSutra’s cryptocurrency exchange.

Now it’s time to hear from you: What do think about Dogecoin’s future? Are you a bagHODLer of Dogecoin or are you planning to be one? Do let me know your thoughts/comments in the comments section below.

And stay tuned to CoinSutra for more hot cryptocurrency discussions!

Here are a few hand-picked articles that you must read next:

19 thoughts on “The Future Of Dogecoin: Is it worth investing in?”