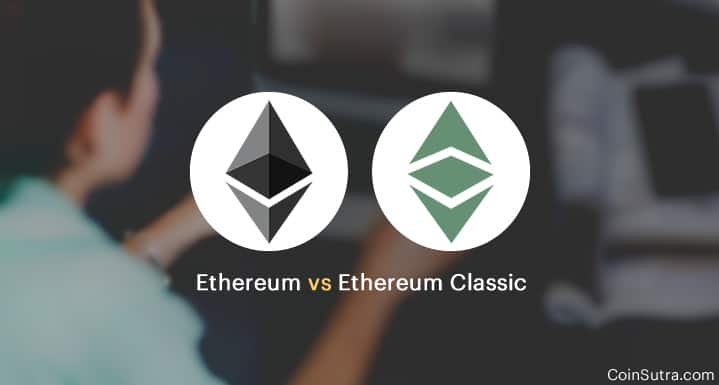 Do you know what the most dynamic space in today’s day and age is? Take a wild guess. Yeah, you are right – the crypto space. A huge round of applause for all those who guessed it right.

Some of you, especially those reading my write-up for the first time, may think I am crazy. Trust me, crypto is crazier.

A very warm welcome to all visiting for the first time. For those visiting after a break, you have a lot to catch up.

Catch up because, in tons of upgrades, forks and controversies have taken place in the cryptoland in the past couple of years which can be overwhelming and throw people off-balance, especially if you stumble upon inaccurate misinformation on the web.

One such event occurred on May 2016 when Ethereum (aka ETH) forked into Ethereum classic (aka ETC). Ever since many newbies have been carried away by FUD and inaccurate information in the cryptoland around these two projects.

Hence, with the aim of spreading awareness, we decided to shed some light on these two projects to help all CoinSutra readers understand it correctly and take a wise decision.

To understand the difference between Ethereum and Ethereum Classic, we need to understand a series of events:

Ethereum is the brainchild of Vitalik Buterin, a Russian programmer. Vitalik, the founder of Bitcoin Magazine, was an early adopter of the Bitcoin/blockchain technology.

He created Ethereum in late-2013 to do things Bitcoin couldn’t and formally announce it at The North American Bitcoin Conference in Miami, the USA, in January 2014.

Ethereum is a decentralized smart contract platform which aspires to be the world’s only supercomputer. It is fueled by its native cryptocurrency Ether (ETH) and is used to build and execute smart contracts and Distributed Autonomous Applications (DApps) without censorship, downtime, or any third party requirements.

The Decentralized Autonomous Organization (aka the DAO) was built to act as a decentralized venture capital fund for decentralized crypto projects. The idea was to make a stateless decentralized organization with no board of directors or employees but instead would use independent investors as its key actors.

In May 2016, the DAO went for a crowd token sale to fund its development. With $150million in the pocket, this stood out to be the second largest crowd sale ever held in history, at that point in time.

Shortly after that, a flaw in DAO’s code was exploited by attackers and more than $50 million was drained out of DAO’s funds.

This led to an upheaval in the crypto space, among DAO investors, and particularly among members of the Ethereum community. This upheaval was mainly because a lot of money of investors was drained out that left some presuming that Ethereum blockchain itself was hacked and the project had failed.

This unfortunate event resulted in huge losses to the DAO investors and the Ethereum community. DAO was one of the earliest and biggest applications that were being built on Ethereum’s platform, and it resulted in a mess. $50 million is by no means a small amount.

When this incident happened, Ethereum was in its nascent stage. Ethereum’s prices dropped as soon as the news was out.

Even though the attackers exploited the DAO code and not Ethereum’s, the latter took a hit to its reputation and market cap because of its relationship with the DAO.

This shattered people’s confidence in cryptocurrencies as a whole.

Post the mayhem, a majority of Ethereum’s community decided in favor of a “hard fork” to restore the investor’s financial losses and the ruined reputation.

A hard fork is a kind of split or divergence where the community decides they will no longer follow the same protocols on the same blockchain. Basically, a new version of the original blockchain evolves from that spot.

So a hard fork was implemented on the Ethereum blockchain at Block 192000 to make up for the loss to the DAO investors. The hard fork made the hacked transaction invalid, and a new version of the blockchain was formed.

As a result of this hard fork, ETC (Ethereum Classic) was born.

While a vast majority of the Ethereum’s community was in agreement of the fork, a small group wasn’t which held on to the notion of ‘Code Is Law‘ and continued on the old blockchain and called it “Ethereum Classic”.

ETC is basically the same as ETH but on the old blockchain.

After the DAO attack, the original Ethereum community got divided into two troops:

Community members who did not support the hard fork idea continued to mine on the old version of the blockchain without upgrading the version.

Since then, both communities have diverged based solely on the versions of the blockchain. However, with time, some more differences arose between the two projects that we will discuss in the next section.

With the passing of a considerable amount of time, both the projects continue to move ahead with a different economic policy.

Ethereum still has an uncapped total supply with a fixed yearly supply, something that Ethereum Classic has changed.

The new monetary policy sets a limit for the total ETC issuance. The block reward will be reduced by 20% at block number 5,000,000, and another 20% every 5,000,000 blocks thereafter. The total supply is expected to be somewhere around 210 million ETC, but not exceeding 230 million ETC.

And this in itself is a huge difference between the two projects which can have a long-term impact on their respective futures.

Also, ETH is planning to move to proof of stake, a change ETC is not willing to make.

Lastly, in terms of ICO launching and DApp building, ETH seems to be way ahead of ETC and enjoys much more confidence of investors.

That is all from my side in the Ethereum vs Ethereum classic debate. I hope this article helps you make wiser and more informed decisions.

Share that decision with us in the comments section below!