Any person who has set foot in the cryptosphere, even if for a day, must have come across certain terms like coin, tokens, crypto coin, cryptocurrency, altcoins etc.

We take a glance and move on to more complex information. But do we actually know what these terms mean? Are they the same or do they possess different meanings? Is a coin the same as a token? Are these terms synonymous?

Well, they are not, but are often used in this way which is inaccurate. But then again, who is to be blamed for the inaccurate information?

Nobody actually, for it is a very new field and often different terms are taken for granted and used inaccurately because we are still learning about it.

And in this learning curve, we often miss the thin lines that actually makes terms like coin and token different.

That is why, I thought of an article to highlight the differences between a coin and a token in the cryptosphere.

What Is A Coin?

A coin like Bitcoin, made by making variations in the original Bitcoin’s code like Litecoin, Namecoin etc. can be termed coins. These are also referred to as ‘altcoins‘ because they are an alternative to Bitcoin with an aim to have usecase similar to Bitcoin.

Therefore, the properties of such coins are also similar to Bitcoin:

Also, there are some cryptocurrencies like Monero (XMR) that were not created on Bitcoin’s code base but are also referred to as coins because they have their own blockchain and also exhibit the above-mentioned properties.

These coins are also sometimes referred to as cryptocoins or cryptocurrencies but when you fundamentally know the concept of tokens you will understand that not all the coins listed on CoinMarketCap are actually coins.

To make it simpler, cryptocurrency can be considered as the parent category. Under that, you have coins/altcoins/cryptcoins as one sub-category and tokens as another sub-category.

However, blockchains such as Ethereum, Ripple, Next etc should also fall under the category of coins because they exhibit some properties of currencies but at the same time do not function solely for the usecase of money. That is why it becomes debatable and confusing.

But in this article, I will keep it simple and keep them in the category of coins because they have their own blockchain with a mixed usecase of acting like money and other utilities.

On the other hand, it is quite easy to distinguish tokens from coins or cryptocoins.

What Is A Token?

A token is a kind of cryptocurrency (without a currency usecase), that is usually issued on top of another blockchain. Generally, in any usecase, tokens represent utility or an asset, or sometimes both.

For example, consider Golem project which has GNT tokens. Golem or GNT tokens are hosted on Ethereum’s blockchain and Ether (ETH) is the primary currency (or fuel) for the entire Ethereum blockchain.

Also, if you want to use Golem DApp, GNT tokens are a must-have because without those tokens one will not be able to use the Golem DApp. 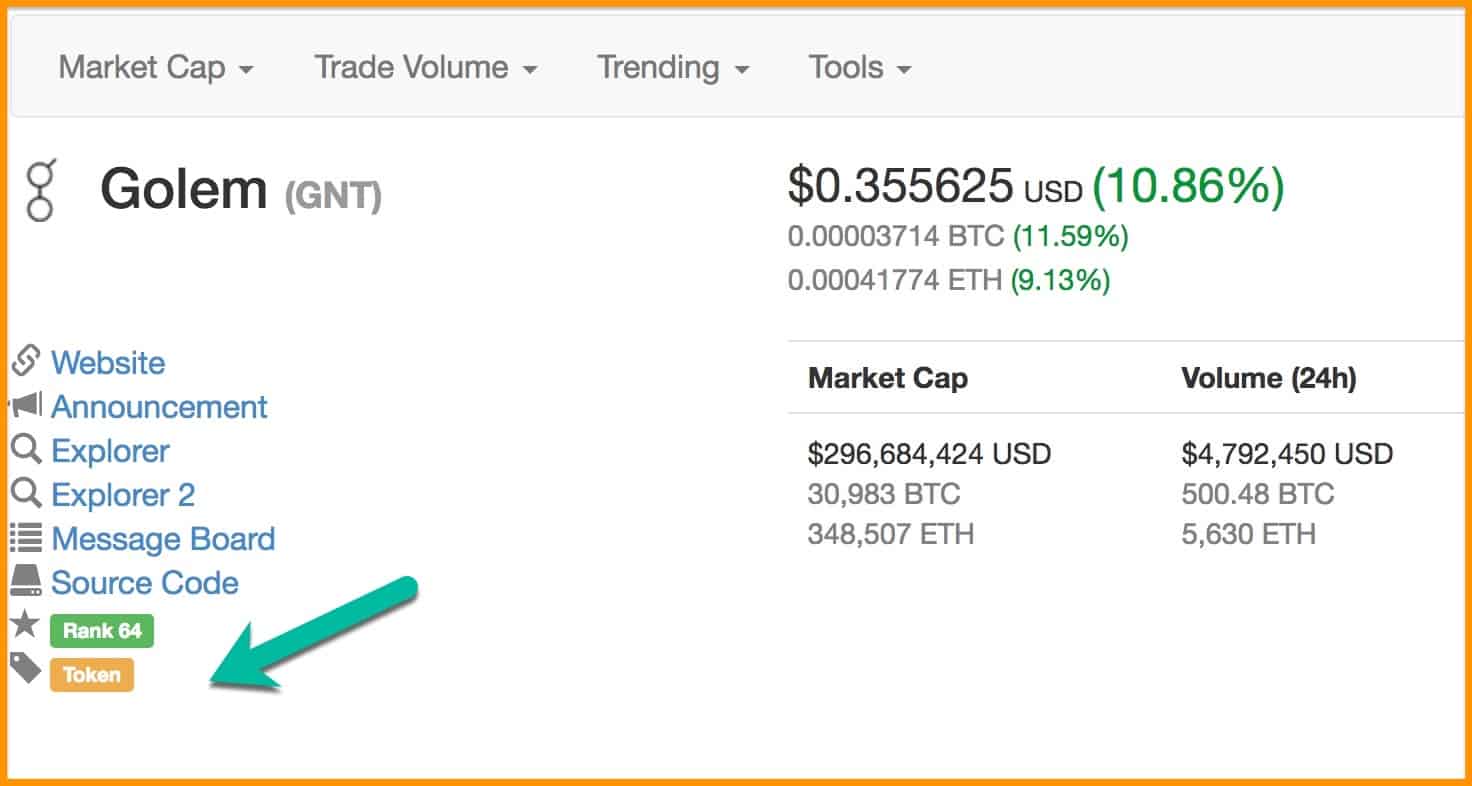 So you see, a token is a secondary asset for a particular application on a blockchain ecosystem which also has a market value but isn’t a currency as straightforward as Bitcoin or Litecoin.

Also, coins like Ethereum that can exist independently, but tokens like GNT can’t exist without the Ethereum infrastructure.

Another example you can take is of CIVIC tokens that also reside on top of Ethereum blockchain. I think these two examples will help you differentiate despite the blurriness of the differentiating line.

The differentiators between coins and tokens are becoming more complex with the launch of niche crypto projects like Walton or Vechain.

However, the positive here is countries like Japan and the US are formulating regulations around different types of cryptocurrencies which should make the picture clearer for us to differentiate between various crypto projects.

That’s all from our side in this article. We would love to hear your thoughts on coins vs. tokens. Feel free to express your views in the comments section below.

Here are a few other hand-picked articles that you must read to increase your knowledge about cryptocurrencies:

7 thoughts on “Coins vs Tokens: Know The Difference [Crypto Basics]”