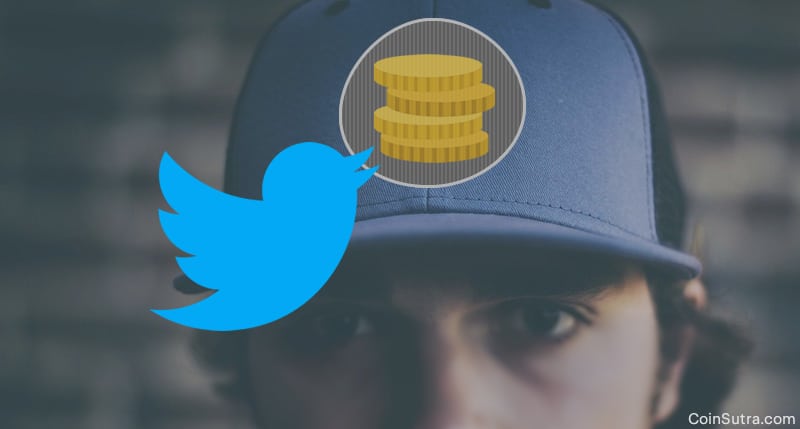 Believe it or not, nowadays everyone proclaims to be a crypto influencer on Twitter. Even those who barely have any experience in the space, mention “Crypto Proponents/influencer” in their bio!

That aside, following genuine crypto influencers on Twitter can be very enlightening.

Enlightening because they are people who are actually building the community and are truly influential.

Therefore, in this article, I am going to list some of the genuine crypto influencers that you should follow on Twitter to enhance your knowledge on the subject of cryptocurrencies and everything around it. 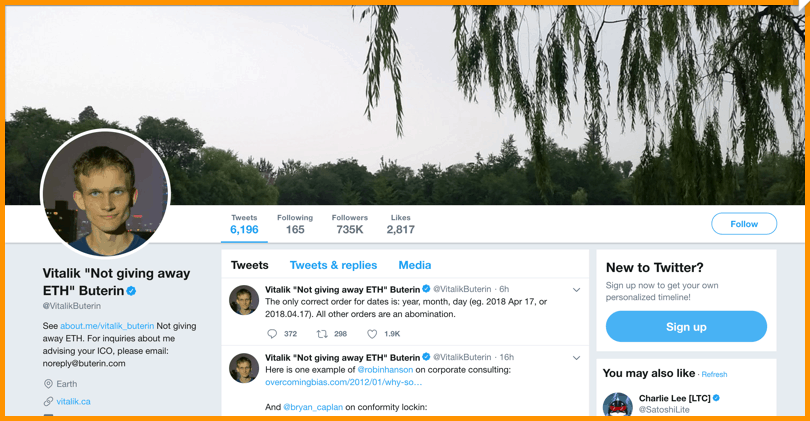 Vitalik Buterin, the college dropout who proposed and created Ethereum in 2015, is one of the must-follow Twitter influencers out there. His Twitter handle is: @VitalikButerin

He isn’t afraid of calling a spade a spade and fears no one in stating his unique and critical opinion around many peculiar problems of open-blockchain projects like Ethereum or Bitcoin.

Importantly, his Twitter threads that he writes sometimes are quite mind-blowing where he discusses scalability, governance, ICOs, DApps, security etc.

Some of his notable tweets that I particularly like are:

59. "Bitcoin Core is some science project for people who live in first world countries…"

Cryptocurrency is an ideal trial-by-fire zone for new security tech. Incentives to attack and presence of anonymous attackers is very high. If a security technology survives in this environment, then it's definitely good enough to consider rolling out in more mainstream contexts.

Anyone who replies to this tweet asking for or offering ETH is a scammer. 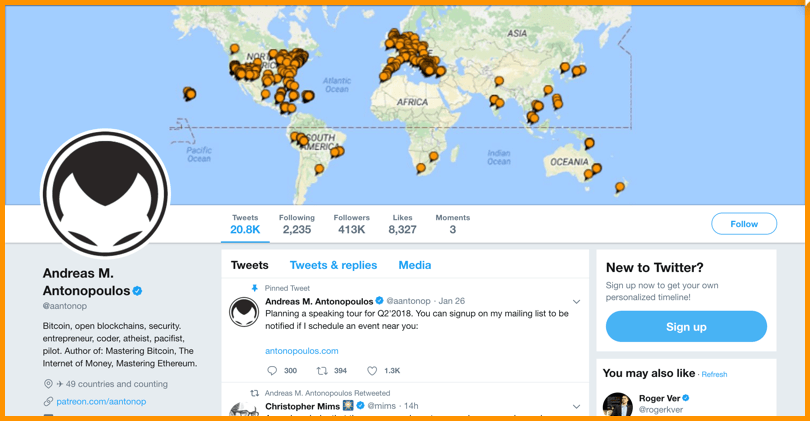 Andreas is the most prolific speaker on the subject of Bitcoin and open-blockchains. His Twitter handle is: @aantonop

He tweets mostly on Bitcoin basics, Bitcoin scalability, and scam awareness. What is not to be missed is his unmatched sarcasm. He also tweets well-recorded speeches on Bitcoin and various multi-dimensional insights on the same matter. He does so to spread awareness about the most important invention post the internet – Bitcoin.

Does it promise regular returns that exceed average market returns?

Does it focus more on recruiting new people than any product? 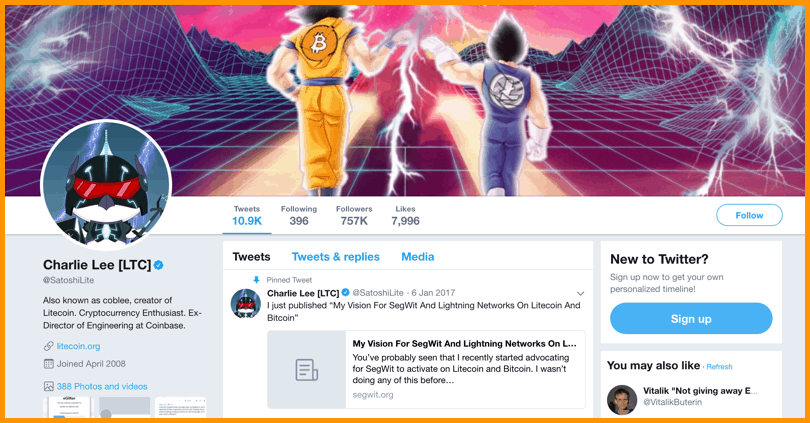 Charlie Lee is the creator of the Litecoin cryptocurrency, which is the silver standard in the cryptocurrency space. Lee, who works full time on Litecoin now, is an ex-Director of Engineering at Coinbase. His Twitter handle is: @SatoshiLite

Charlie Lee has really accelerated the adoption of segwit not only for Litecoin but for Bitcoin too. His atomic swap pioneering tweets has encouraged the developers around the world. Mostly, he speaks about Bitcoin, scalability, forks, atomic swaps etc.

Some of his notable tweets are:

Let's activate SegWit! Maybe not the full scaling solution you want, but it does a ton of good stuff today and enables lightning networks. 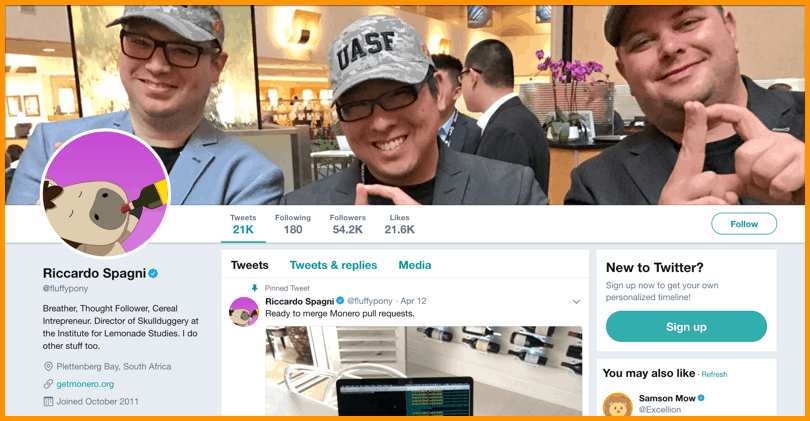 Riccardo is the creator of Monero, the most private and anonymous cryptocurrency right now in the market.

If you are searching for someone a great sense of sarcasm and an eye for detail, you should follow Riccardo Spagni on Twitter. His Twitter handle is: @fluffypony

His tweets are fun to read and he never shies away from expressing his opinion.

Mostly, he tweets about Monero and other private cryptocurrencies but also incorporates the Bitcoin scalability drama.

I speak out against intentional scammers, unintentional scammers, snake-oil, projects making provably false claims, & projects that cannot possibly deliver, not to spread “FUD”, but because there is genuine damage being caused by these projects. #NoMoreScams #SpeakOut pic.twitter.com/7mcSNpGe2V

So much for Verge $XVG and their IP address privacy, someone's publishing originating IP addresses for Verge transactions (not just general node IP addresses). Considering that IP address obfuscation is their single privacy claim, looks like they're toast.https://t.co/NpPLj2G8Z0

Sorry Bitcoin, but you’re apparently useless because you don’t have “actual technology” behind you. Oh well. https://t.co/ZKnOr6gDpQ 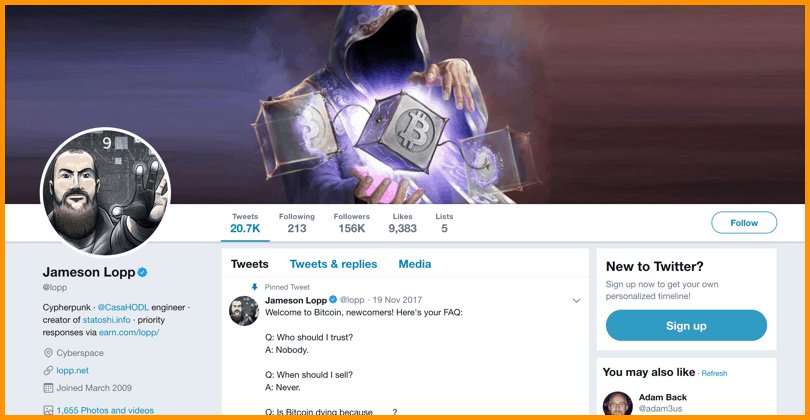 If you are searching for intelligent people building something with Bitcoin, your search end here because Jameson Lopp is one of the pioneer cypherpunks who has been working on Bitcoin for years. He is an experienced team member of the BitGo team but recently quit to create his own crypto wallet called Casa. His Twitter handle is: @lopp

His tweets target a wide range of audience – from Bitcoin beginners to Bitcoin advanced developers – and the topics range from Bitcoin basics to Lightning networks. He talks about political, social and philosophical angles related to Bitcoin, blockchain, and cryptocurrencies too.

Some of his notable tweets are:

Q: What have I gotten myself into?
A: Nobody knows.

Potential physical attackers should take note: these days I only carry testnet bitcoins (which have no redeemable value) around with me. The expected value of mugging me is somewhere between $100 USD and a trip to the morgue.

If you approach Bitcoin as if it's just a:
* currency
* company
* database
* democracy
* developer platform
* science experiment
* social network
* religion
… you're gonna have a bad time. Bitcoin is a chimera and should be approached with a humble, flexible perspective. 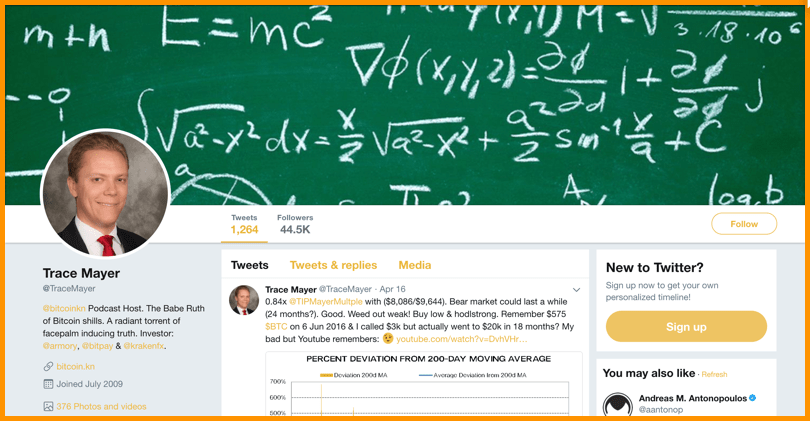 Trace Mayer is a veteran investor in the traditional markets such as gold and was the first blogger who started recommending Bitcoin in early 2011 when it was $0.25 per BTC. Follow him on @TraceMayer

Mayer is an entrepreneur, investor, journalist, monetary scientist and ardent defender of the freedom of speech. He holds degrees in accounting and law and has studied Austrian economics focusing on Rothbard and Mises.

He mostly tweets about economics surrounding Bitcoin, its comparison with other assets in a broader way, and recently about Mayer Multiple which is an interesting way to derive the right buying time for BTC derived from its 200 days MA.

Great Credit Contraction relentlessly grinds on & temperature drops with crypto-winter. Some casualties are $BCH liquidity. $BCH gasping for breath at 0.100049 $BTC. How will relentless waves over next 3-9 months affect $BCH hodlers of last resort? $BTC lifeboats moving away. 🌊 pic.twitter.com/3TEKCYKujj 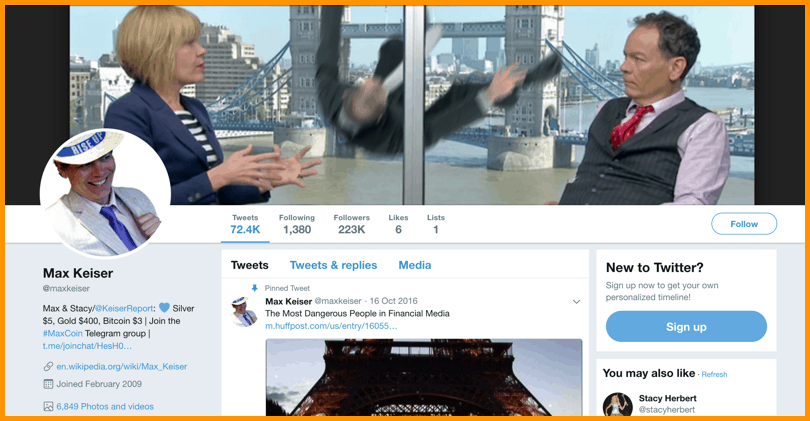 Max Keiser is a bold speaker and proponent of Bitcoin who has been shilling Bitcoin to the masses when it as mere $3 per BTC.

He runs a very popular show in RT every week where he talks a great deal about Bitcoin and the cryptocurrency space in general too.

If you want to see educational tweets that are also funny, follow him: @maxkeiser

Also, he shares his whole theory of how Bitcoin and other cryptos are sucking the economic activity from the traditional markets. He sometimes also tweets about his Bitcoin predictions.

Here are some of his notable tweets:

This pattern will repeat all the way to Bitcoin $100,000 and beyond… pic.twitter.com/o9Wj4reBtv

I’d say learn as much as you can about Bitcoin and cryptocurrencies by following these crypto influencers. Get rid of the fascination of getting rich quick with it, because in that FOMO, you will surely get Rekt!

Also, bookmark coinsutra.community because we are always here to help you learn the technical and economical aspects of sound money like Bitcoin.

Here are a few other hand-picked articles that you should read next: