NEO vs. Ethereum: How Is Neo Different Than Ethereum?

CoinSutra » Cryptocurrency » NEO vs. Ethereum: How Is Neo Different Than Ethereum? 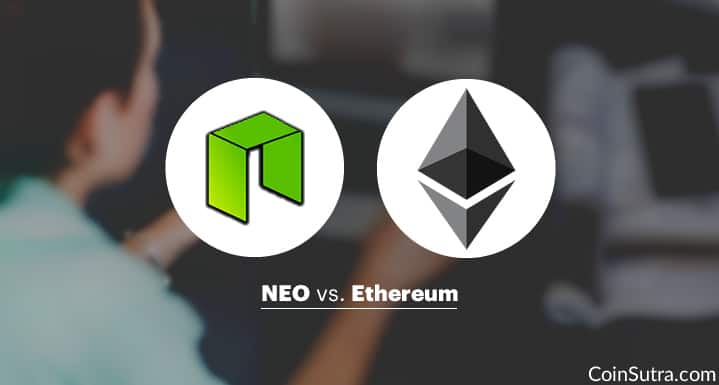 We recently discussed the NEO cryptocurrency, and I shared with you how the price of NEO surged manifolds in a short span of time.

I started wondering why this price rally was so fierce…

These were some questions I had:

These questions pushed me to thoroughly learn about how NEO and Ethereum were different and how they were similar.

And here I am to share with you my important findings.

But before outlining the key differences between NEO and Ethereum, it is important to understand their similarities.

How Are NEO & Ethereum Similar?

Some of the key similarities:

In my opinion, these are the only key similarities.

How Are NEO & Ethereum Different?

When you look around the crypto-market, you will find many altcoins.

dBFT is believed to be more energy efficient than proof-of-work, as POW is a very energy-intensive and expensive. But I don’t see this as a big advantage for NEO because we can eventually expect Ethereum to move to an efficient proof-of-stake mechanism.

This is currently NEO’s biggest advantage in my opinion, but I think Ethereum will solve this soon as they are actively working on scalability.

NEO vs. Ethereum: Who will win?

Well, no one really knows what the future will hold.

Though NEO has said they are positioning themselves to be in direct competition with Ethereum, I still think that there is a long way to go for them in terms of mainstream adoption. This is not speculative investment advice; it’s a fact that Ethereum is well-positioned in the crypto market, especially when it comes to their technological aspects.

But again, no one knows what the future will hold. Both projects are relatively new (in the grand scheme of things), and they both need to deliver on their core promises. When those things start to happen, we’ll have a clearer picture of which one will come out on top.

That’s all from my side in this article on the differences and similarities between NEO and Ethereum.

Here are a few more articles for you to check out:

6 thoughts on “NEO vs. Ethereum: How Is Neo Different Than Ethereum?”