Neblio Cryptocurrency: Everything You Need To Know 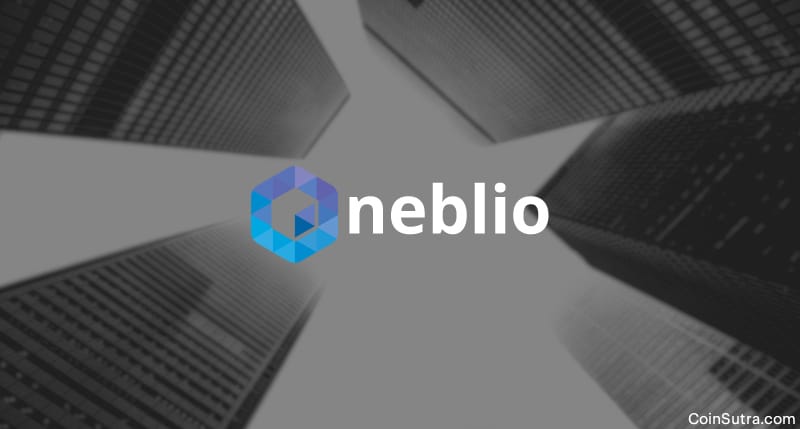 Let’s be honest about “the blockchain” tech. It has been almost a decade now but we haven’t been even able to start replacing our broken legacy database architecture on which almost all our applications are built today.

This is largely because implementing blockchain from scratch is difficult and involves a steep learning curve.

But what if the process of development and deployment is made so easy, relevant and compatible with the current skill set that the developers around the world have today?

Well, the natural result would be the adoption of blockchain sky-rocketing to a whole new level, and that’s what the Neblio blockchain platform wants to do.

In this fundamental analysis of Neblio, I will focus on these points to drive home the message of the next-gen blockchain platforms like Neblio. 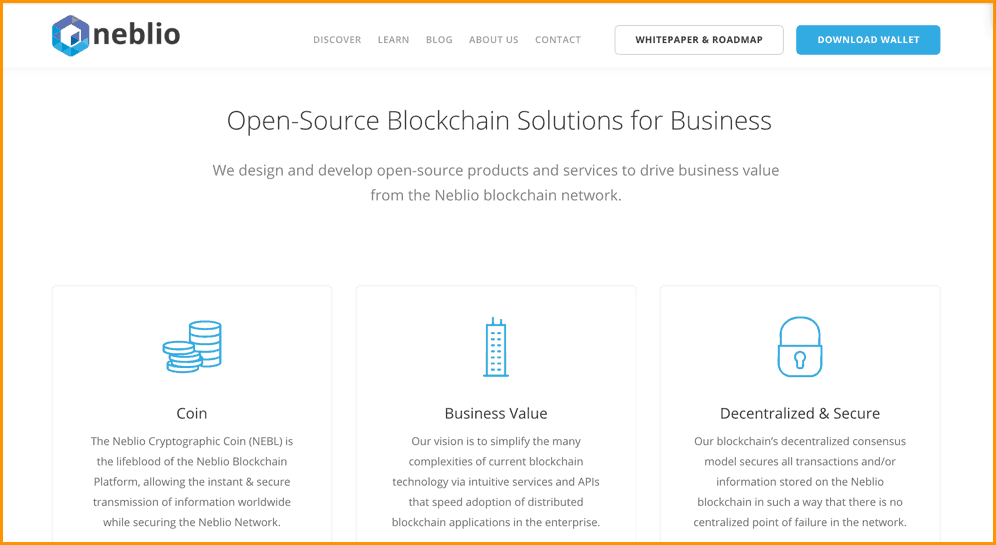 Neblio is a next-gen enterprise blockchain solution that is building the tools and services to bring blockchain technology to enterprises of all size in an easy, fast, and secure way.

Neblio blockchain’s power can be harnessed via these tools that will be further used to make decentralized applications (DApps) specifically targeting business and enterprise customers.

Well, why do that in the first place?

The answer is, to make better applications that are more valuable, easy to make, easy to maintain and don’t have a single point of failures and also to boost the adoption of blockchain technology by providing developer-friendly tools via the Neblio ecosystem.

Neblio is also the name of its native cryptocurrency, also know as NEBL tokens, that fuels operations on the Neblio blockchain.

Neblio is implementing RESTful API for interacting with the Neblio network and blockchain. It is also making 8 API libraries in 8 languages (C++, Python, Go, JS, Ruby, .NET, Java, Node.js) that will ease out the learning curve and accelerate development.

How Is Neblio Solving The Puzzle?

By doing all this, Neblio is actually eliminating the steep learning curve of developing and implementing DApps on the blockchain tech.

Neblio will offer these services to the market:

With Neblio being the leader in developing blockchain, it can provide consultancy to businesses and guide the deployment of blockchain technology, based upon the Neblio blockchain, within their organization.

Some businesses and customers may want to deploy nodes at different locations or offices and some may want to host it with Neblio or on an AWS/Azure-like services. Neblio services can help such customers too.

The core value-add of Neblio is to enable hassle-free access to the modern day DLT-distributed ledger or database technology which is nothing but “the blockchain”. Therefore, to secure the blockchain/DLT-database, it has proof of stake consensus mechanism enforced via its native NEBL tokens model.

NEBL tokens on the blockchain network incentivize network users to secure and operate the network by running nodes across the globe. This network of users creates a decentralized global network powered by NEBL transactions carrying information that is stored in the blockchain.

One can earn by participating and staking a certain amount of NEBL tokens in the network also because it is a proof of stake blockchain.

NEBL is also charged as a fee whenever you use the platform services. Moreover, NPT-1 tokens, which the DApps will be using, will be exchangeable only when NEBL is used as the underlying gas.

The Neblio team is comprised of blockchain and business professionals from all over the globe with decades of experience working for some of the world’s largest enterprise companies like Cisco. Out of the team, these are the notable co-founders: 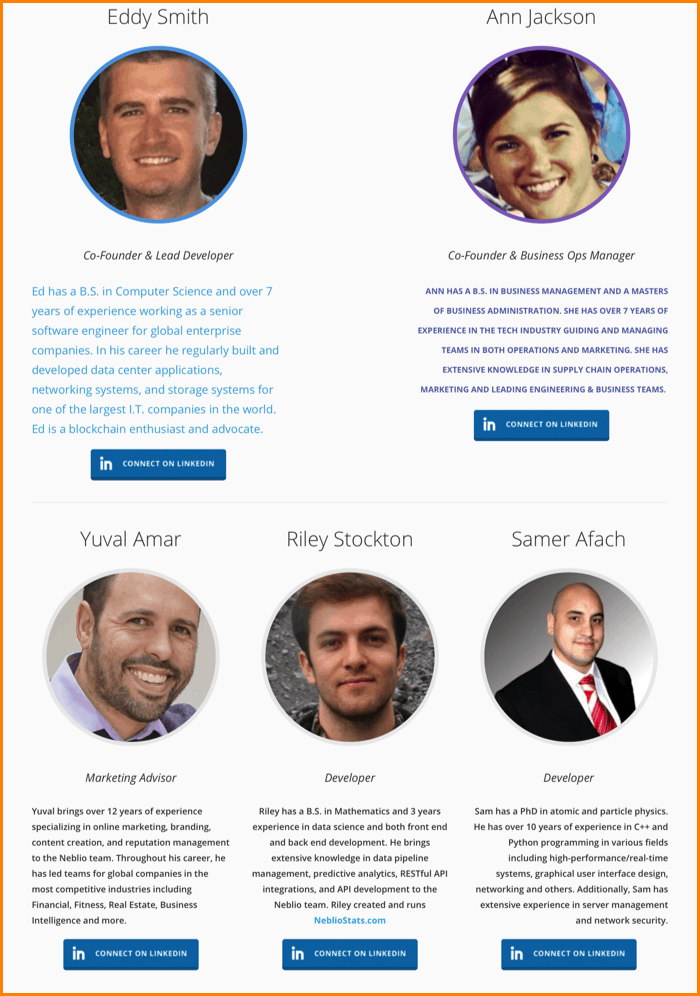 The Neblio ICO concluded in August 2017 without many people paying much attention to it. At the ICO, Neblio wanted to sell 125 million NEBL tokens but only 13,661,373 NEBL were sold.

Nevertheless, despite a not-so-exciting ICO, the team decided to burn the unsold tokens and persevered with the idea they had in their heads.

That is why, according to CoinMarketCap, the total circulating supply is 13,583,243 NEBL, and the current price of each unit is $2. That values it at approximately $26 million (at the time of writing this article).

How To Buy Neblio Cryptocurrency (NEBL)

For good projects like Neblio, there are enough exchanges that provide decent liquidity while buying and selling it, some which are listed below:

Neblio has sufficient wallet infrastructure across all mediums in less than one year of existence, which shows the level of dedication of its team.

Of these wallets, Neblio (NEBL) can be staked on desktop wallets for earning passively in the form of staking dividends. For ‘X’ amount of holdings, you can expect approximately 10% annual returns.

But with the launch of many more NPT1 tokens on Neblio blockchain you can expect an increase in profitability of staking as the fees will also be paid to those staking in it.

You can check the same here in their staking calculator. 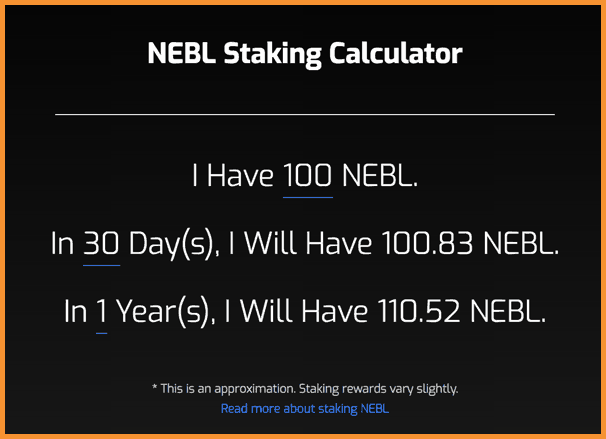 Above is a quick video tutorial for staking NEBL on a desktop wallet.

Also, note that staking cannot be done in mobile wallets but you can definitely do it on a Docker or Raspberry-pi.

According to their roadmap, Neblio looks right on time and is expecting to deliver RESTful APIs in 8 programming language by the end of Q1-2018.

Next on their agenda is to target enterprises for marketing and adoption Neblio blockchain solutions. Apart from that, their most awaited NPT-1 tokens are out and its new wallet Orion which both mobile and desktop compatible was launched recently and more than 20 tokens were created in first 24-hours itself on the Neblio blockchain.

1/2 After a successful beta, Neblio Orion is now live! https://t.co/V4KUyJFXZt
Orion uses the first version of the Neblio API suite to enable an entirely new set of features and interactions on the Neblio Blockchain! Including non-fungible token creation with unique metadata!

Officially announcing Neblio Orion now in PRIVATE BETA!! Orion is our web wallet with NTP1 support! Not only can you now send & receive NEBL from any browser, but you can also create a brand new NTP1 token in just 2 clicks or send & receive your existing NTP1 tokens! pic.twitter.com/SNYUR0ZTqD

This will enable businesses to deploy their DApps with a fully functional token that thrives on the Neblio blockchain.

Their iOS app is also ready. Lastly, based on user-feedback and more, Neblio has targetted the beta release of the Neblio API Suite v2 for Q3, 2018 to identify and target niche areas of the market that can benefit from the simplification of blockchain technology.

The future for Neblio looks bright simply because they are swift in delivery and simple to use – two things that are critical and are needed for the adoption of any new service or product. And the thing that makes me more confident is when Neblio became ready for token launch some ICOs ditched projects like Stratis to host their ICO on Neblio, which in itself speaks volumes about its ease of use.

Update: They have started working with marketing companies like Ladder as they have recognized their weakness in putting the word out.

Some official links that will keep you updated on Neblio: