Learning From The Top 10 Cryptocurrencies Over The Last 5 Years 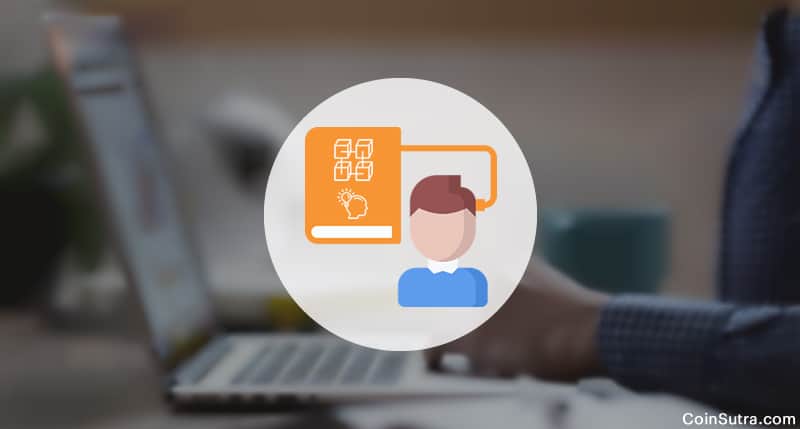 If you observe CoinMarketCap closely, you will notice that the crypto space has undergone a humungous change in the past five years. As of date, CoinMarketCap lists over 1600 coins, which is of how far we have come in just five years.

Back in 2013, CoinMarketCap started with just seven cryptocurrencies too with limited features.

This fast-changing space is an indicator for the future.

Hence, I thought of analyzing the top 10 cryptocurrencies over the past five years so that we can have some insights for the next five.

Top 10 Cryptocurrencies Over The Last 5 Years

This is what CoinMarketCap (CMC) looked like five years ago (on 28th April 2013).

Back then CMC wasn’t even tracking the top 10. There were only 7 cryptocurrencies on the list.

But the interesting point to note here is how many cryptocurrencies from this list would you find in the top 10 of 2014 list and also today’s top 10 list.

In today’s top 10 list, you will only find Litecoin (LTC) which was also on the list 5 years ago. However, in 2014’s top 10 list, as shown below, you will see that three coins lost their place from the top 10.

Then came the bull run of Bitcoin when it had multiplied eight folds in just 12 months.

This year CoinMarketCap was thriving and listing over 80 cryptocurrencies with the top 10 being the ones shown above.

After the Mt.Gox hack in February 2014, Bitcoin prices started dwindling and reached a new low each month.

This year’s top 10 also had major upgrades in the form of DASH, MaidSafeCoin, Stellar, and PayCoin. If you look at the current top 10 CMC list, you will only find Stellar from this list. However, Bitcoin, Litecoin, Ripple, Dogecoin etc continued to be in the top 10 in 2015 as shown in the above images.

And this way the biggest bear market of cryptocurrencies continued throughout the 2015 period.

Just like winter turns to spring, the season for an increase in the Bitcoin price came in 2016.

By this time Ethereum was also born and there were significant changes in the top 10 cryptocurrencies.

And by this time Peercoin has regained some traction and was back in the top 10 list. Ethereum had risen to top 5.

By February 2017, Bitcoin had crossed $1000 mark and the whole market started moving in the positive direction.

And if you compare this list to that of 2014, you will find a huge difference Monero made its way up to the top 10 cryptos in 2017 while the Bitcoin hard fork of August 2017 gave rise to Bitcoin Cash.

The top 10 coins were shuffling a lot and many new coins and ICOs were also launched. The crypto fever had caught up again.

NEM and Augur were also added by then and the top 10 of 2017 looked totally new as only BTC, DASH, LTC and XRP made to the list.

The CMC’s top 10 list has seen drastic changes with high coin supply coins topping the table as of today: 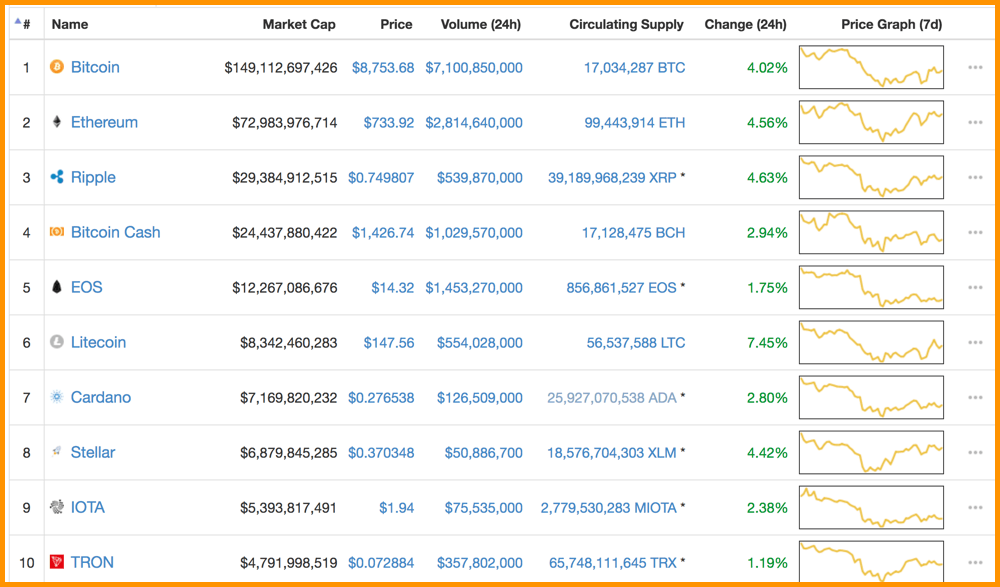 And if you observe closely, names like TRON, IOTA, Cardano, EOS etc that were unheard of at the start of 2017, have made it here.

The big point to note here is, ever since 2013, Bitcoin hasn’t lost its throne of being the most loved and dominant cryptocurrency of the world irrespective of the price fluctuation.

It would be naive if I don’t acknowledge that its market share has reduced significantly, but it still tops the tables.

Furthermore, there are innovations like Segwit, Atomic swaps, and Lightning networks which are helping Bitcoin in continuing its legacy.

Conclusion: What can you learn from top 10 cryptocurrencies? 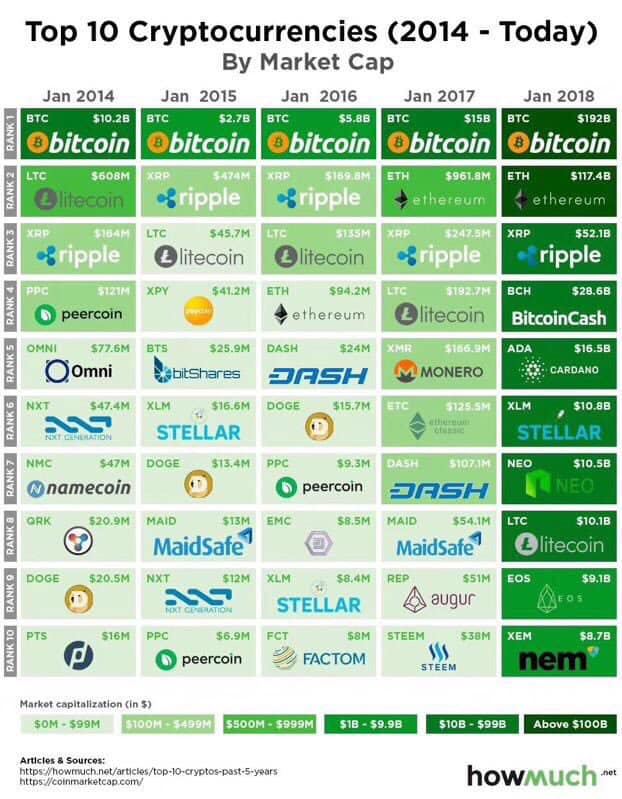 The point of writing this article was not only to show you the variations in the top 10 cryptocurrencies over the last five years but also to draw home the message of investing.

There is a lot to be made in this early crypto market but there are high chances that your cryptocoin might lose the race and will be thrown out of the list.

Furthermore, as the market matures, you will see more educated investors making the bets thereby bringing more stability to this volatile market.

But no one can tell you when this will happen. Therefore, always look into the fundamentals and use cases of a coin before investing.

In this regard, CoinSutra can be a trustable resource as we keep on covering coins that have a fundamental use case.

That’s all from my side in this article. I hope you will be able to gather meaningful insights from this write-up.