GameCredits: Everything Beginners Need To Know 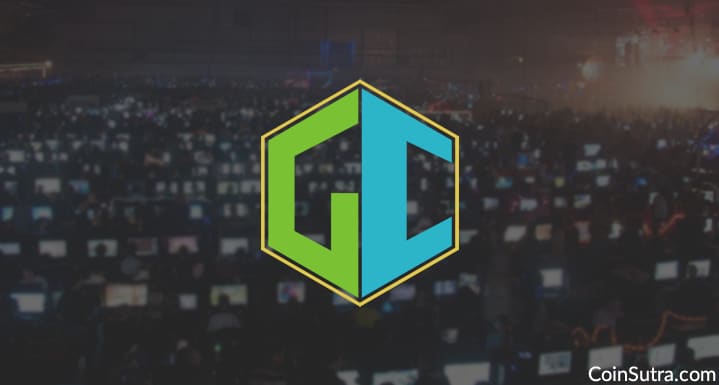 Are you a video game and/or a cryptocurrency lover?

Well, then you must be interested in listening to what I have to say today.

But wait, what do cryptocurrencies have to do with video games?

Well, with the introduction of Bitcoin and the blockchain, a race has started to make everything decentralized and digital.

From our identity, to our money, to our real estate’s contracts, everything is being redesigned to be taken to the blockchain.

Then why should the $100 billion dollar gaming industry be left behind?

The gaming industry is going on the blockchain, and the company behind it is GameCredits Inc.

GameCredits (GAME) is the cryptocurrency of this new ecosystem, and they are here to solve some of the fundamental problems and friction points of the gaming industry.

And that is what we are going to discuss today…

But before we start, I would recommend you watch this short video on how the gaming industry works. This will help you quickly grasp why GameCredits matters and what they are doing. 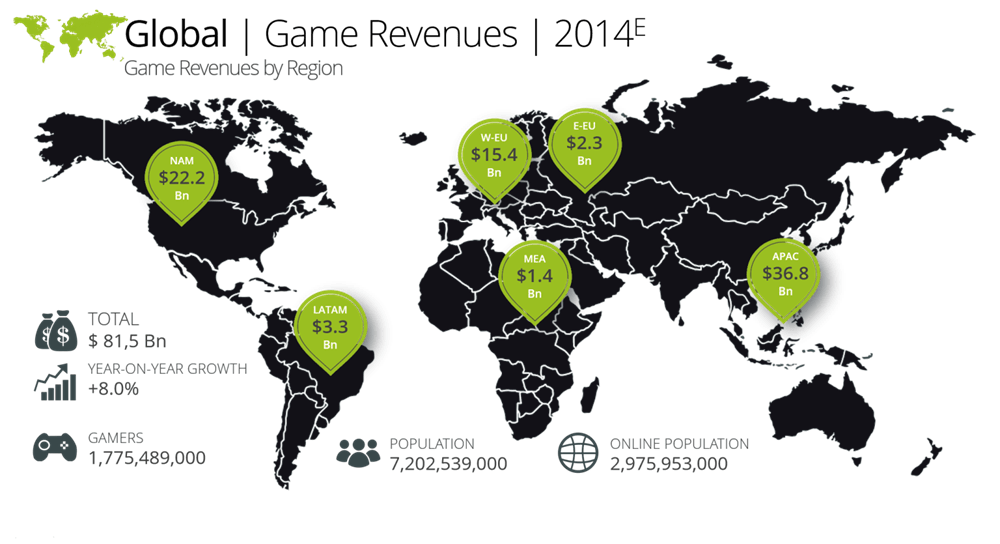 In a nutshell, the gaming industry mainly has these key players:

GameCredits (GAME) is a digital currency based on blockchain. Its purpose is to become the universal currency for 2.6 billion gamers worldwide, to empower game developers both big and small in order to further grow the 100 billion dollar gaming industry, and to accelerate the wide adoption of decentralized cryptocurrencies as a better alternative to government-issued fiats.

GameCredits (GAME) is an open source peer-to-peer digital cryptocurrency designed for in-game payments, as well as for payouts to developers and gamers.

It was incepted in 2015 under the name GamersCoin (GMC). It was later rebranded to GameCredits (GAME). It is primarily a technical clone of Litecoin (LTC) before SegWit, with some improvements here and there specific to their gaming requirements.

GameCredits Inc. is a company which includes people of diverse backgrounds who are experts from both the blockchain and gaming industries. It began operations in 2016 and consists of several original founders of the GameCredits (GAME) cryptocurrency.

They have also partnered with Datcroft Games LTD– a giant gaming development and marketing company having over 12 million registered gamers.

Together with GameCredits Inc., they are committed to designing a frictionless payment gateway and blockchain-based in-game monetization platform for the gaming industry.

Note: This is a proprietary payment gateway which allows gamers to purchase in-game content for the games listed on the GameCredits gaming store.

In the very beginning, the founder of GameCredits was not that visionary. But the whole concept was supported and driven by two very pioneering co-founders, Nebojsa Maksimovic (nicknamed Nele) and Aleksandar Mihajlovic (Alex). And since then, the overall ecosystem has matured.

To find more details about the GameCredits team, visit here.

By using the GameCredits cryptocurrency (GAME) and the GameCredits platform, 3 key actors of the gaming industry will get what they want, which the traditional currency and gaming platforms cannot provide.

Problems the 3 key actors of this industry face:

In traditional platforms, gamers have low currency deposit limits, there is a low amount of security and anonymity for their identities, and they can’t transfer money or credits seamlessly across different games which they have earned in one game.

As a result of the latter, whenever they switch games, they have to pay a fee to banks for making an in-game purchase.

In traditional gaming platforms and payment solutions, as the deposits are low for gamers and banking takes a cut for the deposits, this naturally affects the revenues of gaming companies.

For developers, the traditional way brings a lot of challenges. They need to wait for weeks (minimum 60 days) for their earning to get processed. Moreover, when their payment arrives, it is up to 30% less than the actual profit because of the publishing platforms like the App Store and Google Play who take their cut first.

There are also some gamers who make fraudulent payments in which developers lose their earnings.

All of these problems can be bypassed by using the GameCredits cryptocurrency and their gaming platform. 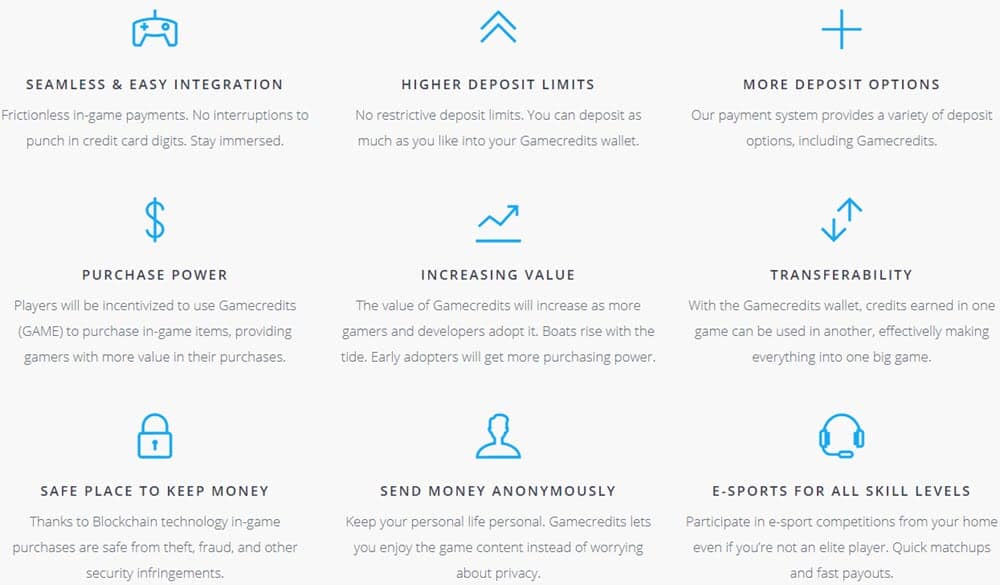 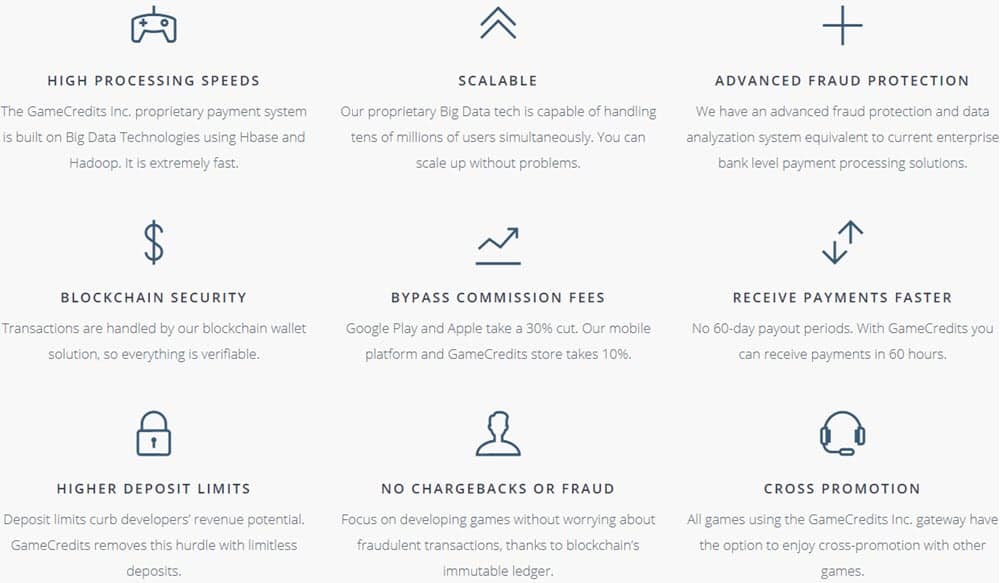 GameCredits (GAME) is a clone of LTC and is a mineable cryptocurrency which uses the Scrypt algorithm. Every 1.5 minutes, a GameCredits block is mined, and 25 coins are generated per block reward.

The total number of GameCredits to ever be produced is 84 million units. At present, there are 64,355,352 million units in circulation.

At the time of writing, as per CoinMarketCap, the total circulating supply of GameCredits is 69,180,388 GAME, and the price of each unit is $0.19, which puts the market capitalization of GameCredits at $13 million.

How to Buy GameCredits Cryptocurrency

In my opinion, GameCredits is the most easily purchasable altcoin. It is listed on many exchanges and can be bought in direct exchange of fiat (USD, EUR, GBP etc) via their special proprietary payment gateway and wallet.

Another easy way of buying GameCredits is through Changelly. Here you can exchange your other coins, such as BTC, LTC, or ETH, in exchange for GameCredits tokens. The procedure is very simple.

You will require the following things to buy GameCredits:

Note: Though this guide shows how to buy Ripple in exchange for BTC, the process is the same to buy GameCredits (GAME).

Buying an altcoin directly from fiat is very rare. Generally, when you need to buy an altcoin, you need to first go and buy BTC/ETH in exchange for fiat and then exchange that BTC/ETC coin for the altcoin.

But you can buy GameCredits (GAME) directly from their proprietary payment gateway in exchange of fiat currency like USD, EUR, or GBP via a credit/debit card. Through this wallet, you can also buy GAME using BTC as well.

Soon they are planning to add more fiat currencies and cryptocurrencies for users to buy GameCredits.

The only drawback I see here is that it is a hosted wallet where you don’t have access to your private keys. Though, the company claims it to be a specially designed payment gateway for preventing fraud.

But in my opinion, if they somehow convert this into a non-hosted wallet, then it will become a go-to wallet for many gamers and cryptocurrency lovers. 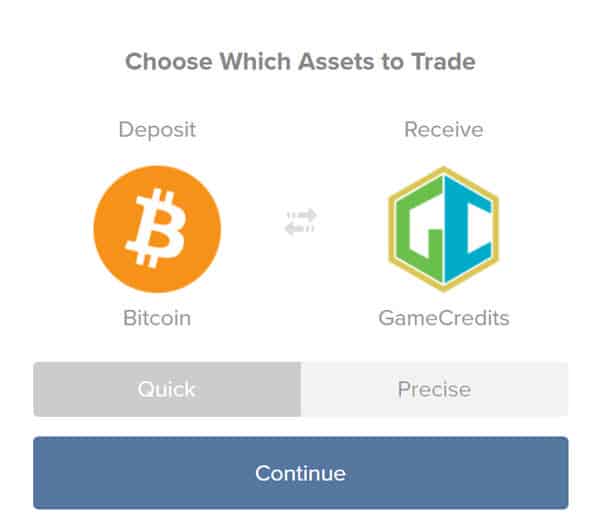 ShapeShift is an exchange platform similar to Changelly. Here you can also buy GameCredits by exchanging any supported cryptocurrency.

At present, ShapeShift supports more than 30 cryptocurrencies (including GameCredits).

Personally, I prefer using Changelly for better exchange rates and a better transaction history feature to track my funds.

If you need to know the step-by-step process of exchanging other cryptocurrencies for GAME, see our guide on ShapeShift.

Note: Though this guide is for exchanging ETH for BTC, the process is exactly the same for buying GAME.

GameCredits is one of the oldest altcoins in the market. Since its inception 2015, numerous wallets have mushroomed to satisfy the needs of various users.

At present, the Android version of the wallet is also a hosted wallet which doesn’t have the private keys. But the two-factor authentication makes your funds secure.

More innovations are underway in GameCredits, and soon there will be an iOS wallet.

The GameCredits team and their partnerships are looking more solid than ever. Some of you may easily say that their cryptocurrency has not done so well in the last 3 years, but let’s understand that it takes time to break the stigma and conservatism of any industry.

Even when I was present at the BTCC Conference In Mumbai (10th August 2017) I was able to speak with  Sergey Sholom (CEO) in detail. There GameCredits also unveiled their revolutionary concept of GNation – Nation of gamers. With GNation, they aim to unite the gaming community under one umbrella which provides end-to-end solutions for all. They talked about the Indian gaming market which is expected to increase more than 3 times by 2020. Also, GameCredit’s integration with BitBay and payment processors like Paytm & PayU will open up further possibilities.

India's largest payment providers PayTM and PayU are coming to the GWallet. The $GAME is on! #cryptocurrency #gaming pic.twitter.com/sPyrMtZmzW

Also, they have an exciting lineup of products to capture the attention of gamers, developers, miners, and traders. Some of which are such as:-

From the standpoint of crypto investment since 2015, the GAME crypto has grown steadily at a rate of more than 1500% which is better than any other existing non-crypto investment instrument.

In the next 3-5 years, if GameCredits is able to do what it says, then for low-risk investors, investment in GAME would prove to be very valuable.

And needless to say that the gaming industry is one of the hottest use cases for blockchains and cryptos. Even if GameCredits is able to grab a fraction of the gaming industry pie, which is a staggering $100 billion dollar pie, then it will be reaping ample profits for its investors.

Let’s say that if GameCredits Inc. is able to get a 10% share of the market, this means that $10 billion would be used annually by gamers and developers. And this would be around the same value for the market cap (which is now just $100 million).

Apart from all this, their recent move of launching an ICO for the MobileGo project was very smart. The funds collected during the MGO tokens sale will mostly be spent on marketing and development of the GameCredits Mobile Store. A big share will be also spent on direct marketing to acquire more gamers on the platform, which will, in turn, increase the demand for GameCredits.

Sorry guys, I had to talk about MobileGo because without talking about it, the real potential of GameCredits wouldn’t be clear. I know it feels like the last missing piece of the puzzle, but I have to leave that for another article. I will be back soon with a detailed introductory guide on the MobileGo project and tokens.

So until that time, stay tuned to CoinSutra and keep learning about the blockchain revolution!

Here are a few more Cryptocurrencies that you must know:

1 thought on “GameCredits: Everything Beginners Need To Know”