A Beginners Guide to Ethfinex [An ERC20 Exchange]

CoinSutra » Exchanges » A Beginners Guide to Ethfinex [An ERC20 Exchange] 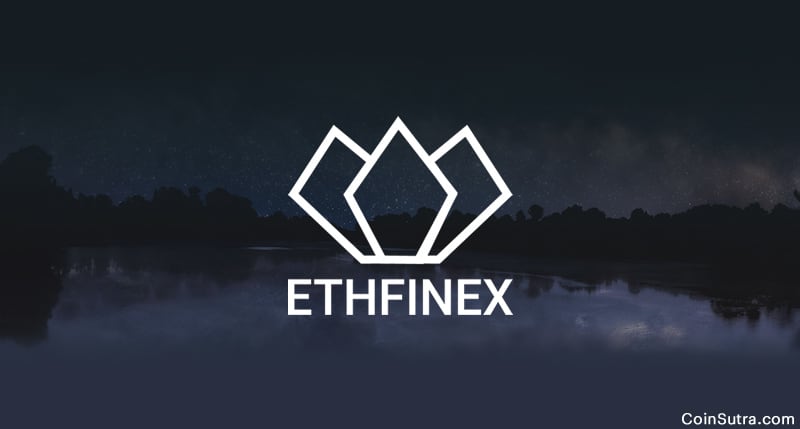 We have covered a lot of exchanges in the past after thoroughly reviewing them.

On similar lines, the exchange we are covering today is a little different and rather interesting compared to the rest of the exchanges we have covered on CoinSutra thus far – Ethfinex.

I stumbled upon this exchange while researching for decentralized exchanges (DEX).

Those of you who know about Ethfinex might argue that it is not a decentralized exchange, and I agree. However, sooner than later, it will be one of the best DEX you will ever see in the market.

Ethfinex is another exchange launched by a famous Bitcoin exchange Bitfinex. And as the name suggests, no rewards for guessing, ‘Ethfinex’ is an exchange specifically dedicated to trading Ethereum-based tokens, also known as ERC20 tokens.

Ethfinex is currently launched as a centralized exchange, but in due course of time, it will transform itself into Ethfinex DEX that will power the tokenized economy of ERC20 tokens.

It plans to do so by introducing new native token in its ecosystem called Nectar token about which we have already covered in detail here: Ethfinex’s Nectar Token Is Here And Its Here To Stay!

The exchange is currently in the Beta phase and not ready for full-fledged trading. But if you are an early adopter of new technologies, you should give it a shot.

Registrations on Ethfinex are pretty straightforward, just like any other crypto exchange.

You need to sign-up using your email ID and complete a KYC after it. The KYC process can take up to 6-8 weeks, so the earlier you start, the faster you will get the access. Here, the guides for identity verification for individuals and businesses.

However, to attract serious traders they have kept some terms and conditions that you need to accept before singing-up on Ethfinex.

And here are those: 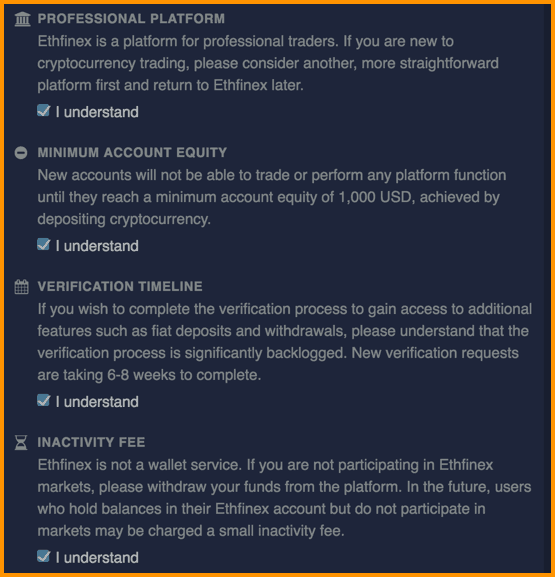 Here are the recommendations from Ethfinex to maximize your crypto security:

The Ethfinex interface is pretty awesome and looks much like Bitfinex. But being a beta version, it is jittery, something that should not be a real trouble after some time. And when you go to ‘trade’, you will be greeted with a dashboard like this: 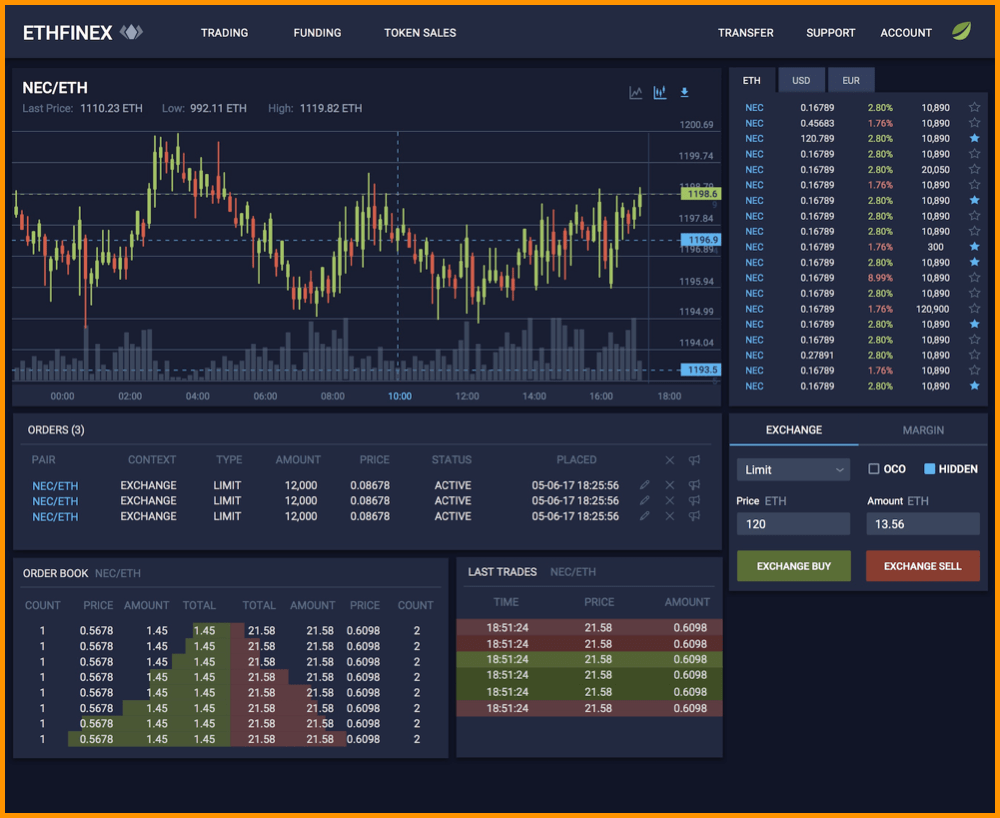 Also, On Ethfinex, if you are a pro-trader, you will find advanced trading tools such as limit orders, stop orders, trailing stop, fill or kill, TWAP, and others, along with different market charts for various intervals so that you can decide wisely.

Ethfinex’s fee structure is based on maker and taker where volume decides the category of the fee you will be charged. Here is the chart for it:

Also, whenever you withdrawal or deposit anything, you are charged a certain fee as per the chart below: 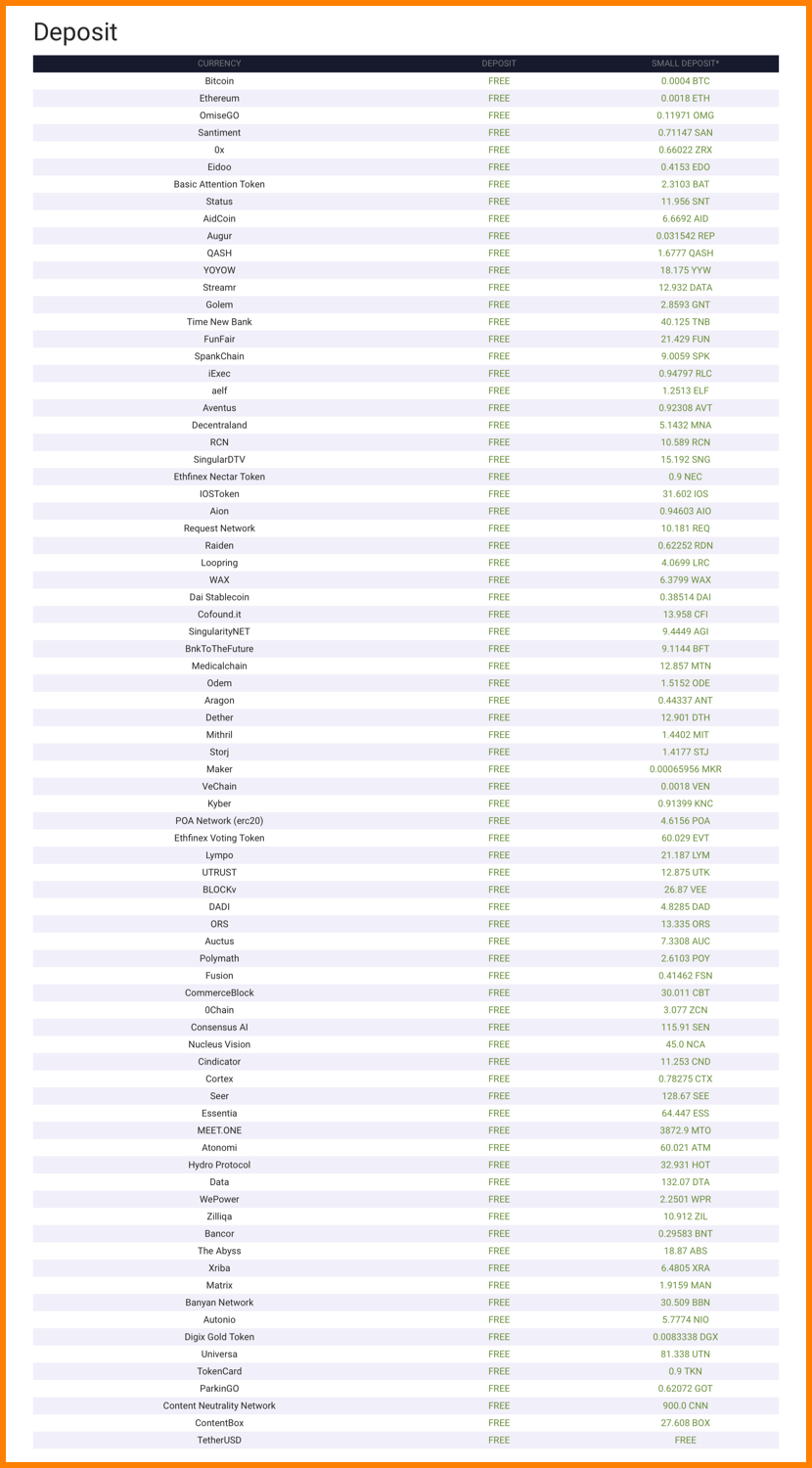 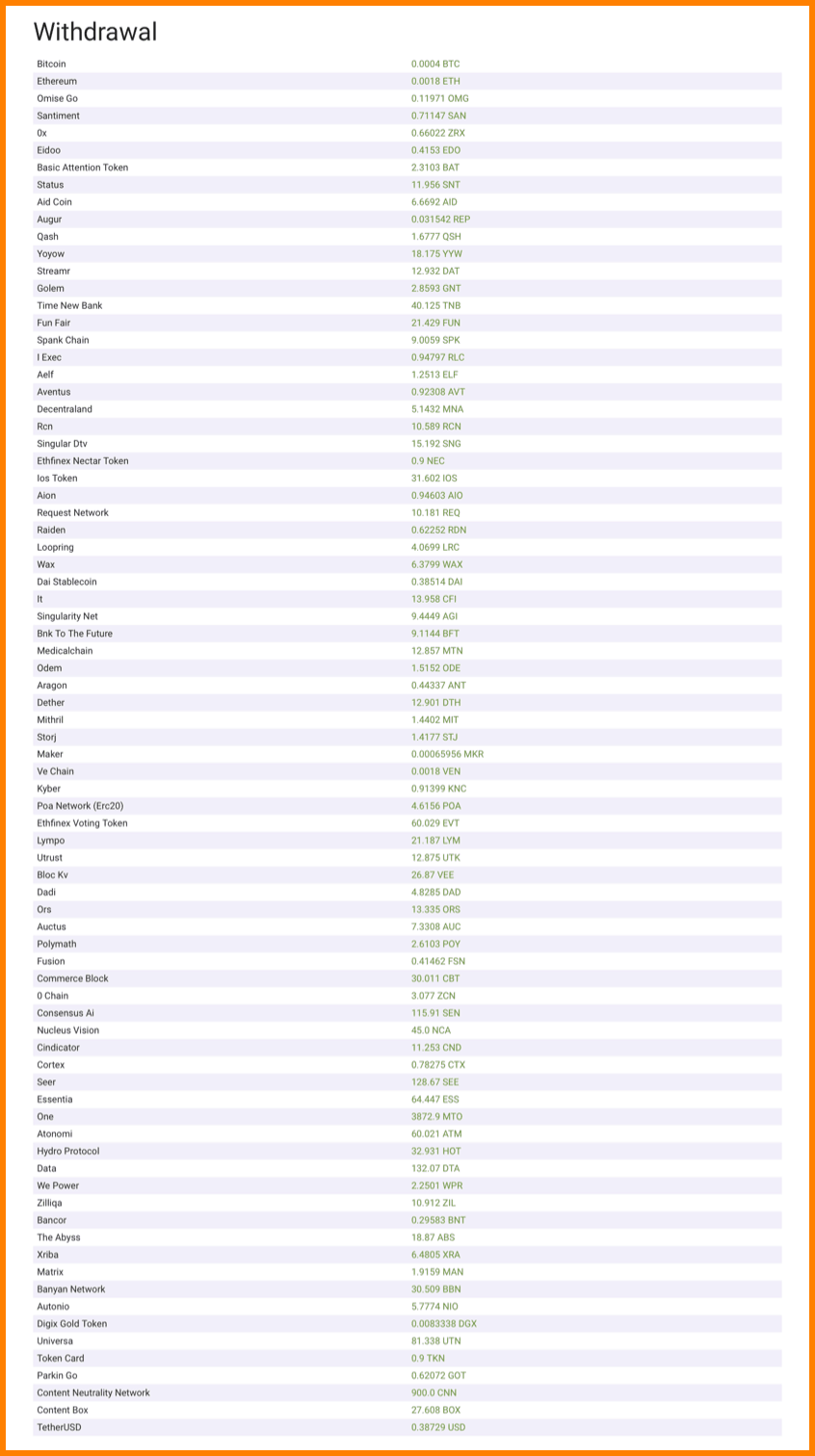 Ethfinex is strictly for non-US residents only because their NEC-Nectar token is viewed as a security threat under US laws.

Other countries like Japan, Canada, Australia, India, Korea etc can actually use the exchange in a hassle-free manner to trade ERC20 tokens.

There is no doubt that Ethfinex is a legit exchange and is going become one of the leading exchanges for ERC20 tokens very soon.

Moreover, it is backed by the Bitfinex team which is already experienced in running a very successful Bitcoin exchange for years now. So they bring their expertise of security and infrastructure with them for Ethfinex too.

And lastly, let us not forget about the token economics of Nectar token that will help Ethfinex go decentralized in the near future and we all know that DEX is the future of cryptocurrency. Not just that, the process transformation into a DEX has already started with the launch of Ethfinex Nectar Market Maker & Reward Program that has the following benefits:

Additionally, there are high chances that the price of NEC might appreciate in the future because of the additional privileges stated above.

That’s why the good thing, for now, is to log in to Ethfinex using your Bitfinex credentials and register on www.ethfinex.com/nectar. Also note, to participate in the Nectar market maker program, you need to do a complete KYC verification beforehand and it can typically take days before you are approved. Therefore, plan accordingly if you wish to get NEC tokens early.

Note: US individuals are not allowed to earn or trade Nectar token (NEC).

Update: These features and opportunities are now live on Ethfinex. Plus now you get a new token called EVT-Ethfinec Voting Tokens if you are holding NEC tokens.

EVTs are spent when voting for one of the tokens on the list. All remaining EVT not used in voting expire at the end of the two week period and the EVT markets on Ethfinex are then cleared. Users will be required to vote or sell the EVT before expiration to avoid any loss. Tokens withdrawn to external wallets will also expire and balances will disappear at the end of the vote. This is automatic and will expire across all Wallets. EVTs are then reissued based on user’s updated NEC balances to be used in the next token listing vote and the EVT market begins again. (Source)

Also, now they have launched their decentralized version of the exchange, called Ethfinex Trustless and let me tell you it looks great: 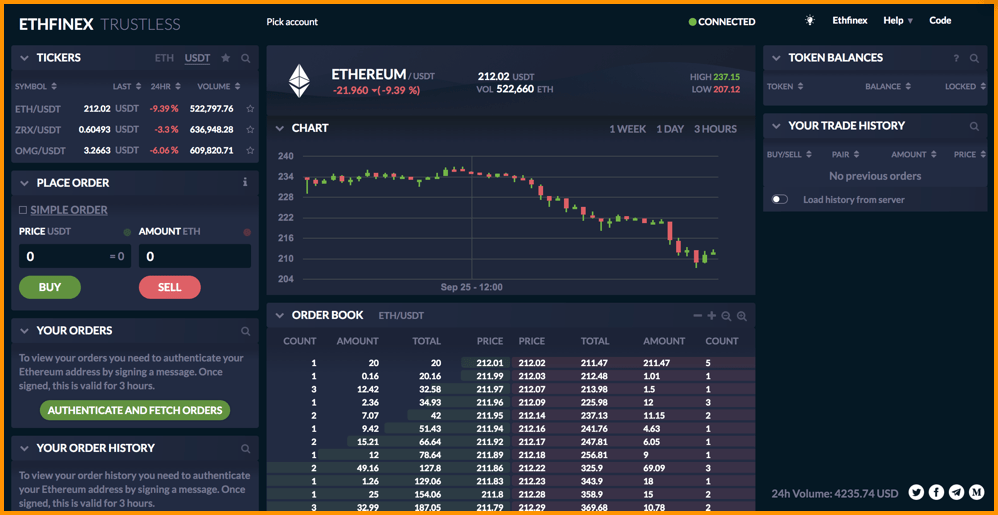 It is time to hear from you: Are you buying NEC tokens? Do think Ethfinex has it to become the next big exchange like Bitfinex? Do you think Ethfinex DEX will rule the ERC20 market? Let us know your thoughts in the comments below.