Free Airdrop for EOS Holders on April 15: Everything You Need To Know To Claim It!

CoinSutra » Cryptocurrency » Free Airdrop for EOS Holders on April 15: Everything You Need To Know To Claim It! 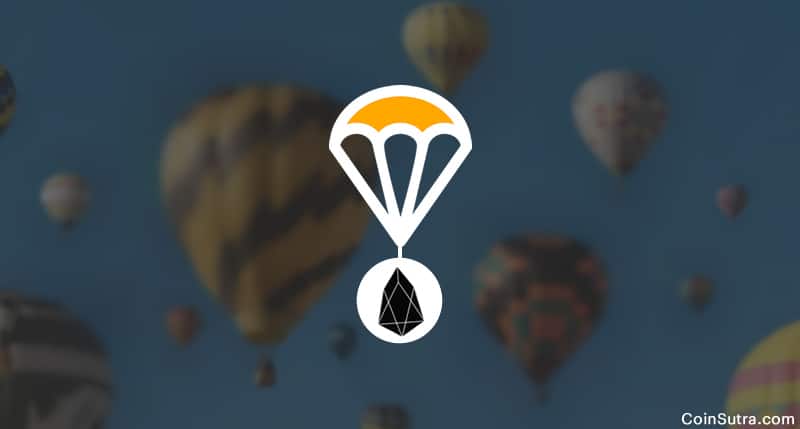 One of the many ways to make money through cryptocurrencies is Airdrops.

Cryptocurrency airdrops are the new way to decentralize the whole ecosystem. It is also a good way to incentivize the early adopters. (Read: Airdrops In Cryptocurrencies: Everything A Beginner Needs To Know)

Fact: Not all the airdrops are worth claiming. Moreover, you need to stay alert so that you don’t get scammed by a fake airdrop.

But some airdrops are real and that’s why it is worth looking into them to make the most of the opportunity.

In line with that, there is another interesting opportunity that the EOS project is presenting in the form of airdrop of eosDAC tokens.

Wondering what EOS or eosDAC is all about?

Well, let me brief you before talking about the airdrop.

What Is EOS & eosDAC?

On the other hand, EOS also understands the governance problem of decentralized blockchains hence it has incorporated a model of DAC or DAO (decentralized autonomous communities or autonomous corporations) through which the whole ecosystem of EOS will be governed further in the future after its mainnet launch.

A DAC is a type of organization which is owned by its members with all of its business logic controlled via code which anyone can inspect. The code sets in place the rules and the members can develop proposals and make decisions. A key feature of DACs is that have the ability to feed value back to all members who become part owners of enterprises rather than consumers. Currently, the code and tools needed for a DAC to run effectively are not available so eosDAC will evolve into a full DAC through several iterations and help to create the necessary code. (Source-EOS website) 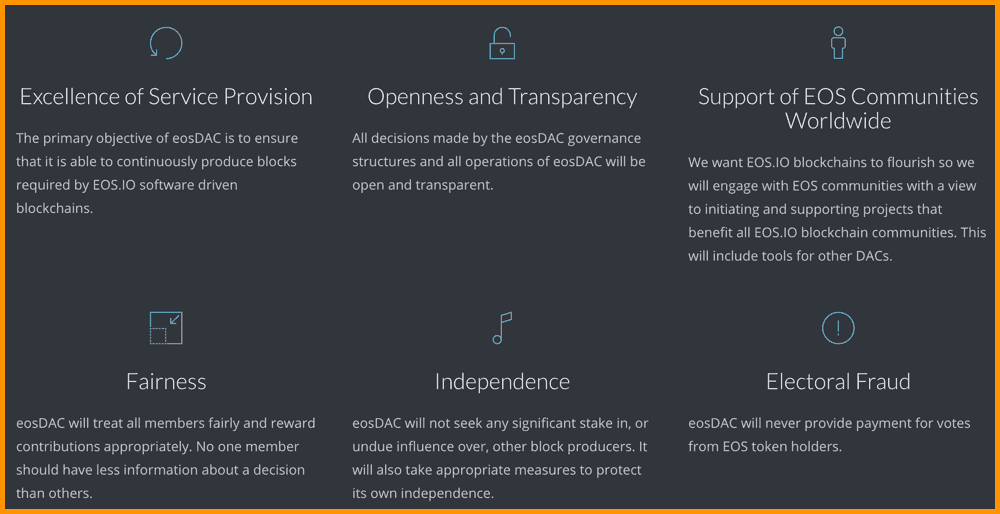 There are huge incentives in becoming one of the main block producers in the EOS system as that producer will receive a significant reward in terms of EOS tokens over-time due the proof of stake consensus mechanism of EOS.

Instead of ‘mining’ on the Proof-of-Work algorithm like Bitcoin and Ethereum, EOSIO blockchains will use the Delegated Proof of Stake algorithm, whereby token holders vote in 21 main block producers and 100 reserve producers. These block producers will require a major infrastructure to handle enterprise-class decentralized applications and will need to be significant entities capable of scaling as required. Block producers will be paid through the limited inflation of EOS tokens in circulation. (Source- eosDAC website)

And that’s one of the main reasons to become a prominent DAC in the EOS ecosystem.

eosDAC is being created and launched by BlockMaker Ltd. which has done the following allocation for the total token supply of 1,200,000,000 eosDAC tokens

How To Claim eosDAC Airdrop Specifics?

eosDAC is an ERC20 token for now but will migrate to EOS once the EOS platform is launched.

Note: The airdrop of eosDAC tokens is strictly for EOS HODLers and 75% of eosDAC, which is 900,000,000 tokens, will be distributed to EOS holders based on following break up:

All EOS token holders holding 100 or more EOS tokens at the end of Day 300 of the EOS crowdsale (i.e. April 15th, 2018, 01:00:00 UTC) will receive 1 eosDAC token for each EOS token. These tokens will be transferred automatically into their Ethereum (ERC20 compatible) wallet where they control their private keys. Examples of such wallets are Ledger Nano S, Trezor or MyEtherWallet.

Any accounts with less than 100 tokens will not receive the airdrop automatically but will be eligible (until 15th May 2018) to apply through a manual method that will be explained further in time in their newsletter, so do sign up to the newsletter for updates.

Holders of EOS who have their EOS on exchanges need to confirm from the exchanges if they are supporting the eosDAC airdrop. If not, you would need to withdraw your EOS tokens from exchanges to a self-hosted wallet like Ledger Nano S, Trezor or MyEtherWallet before the snapshot. 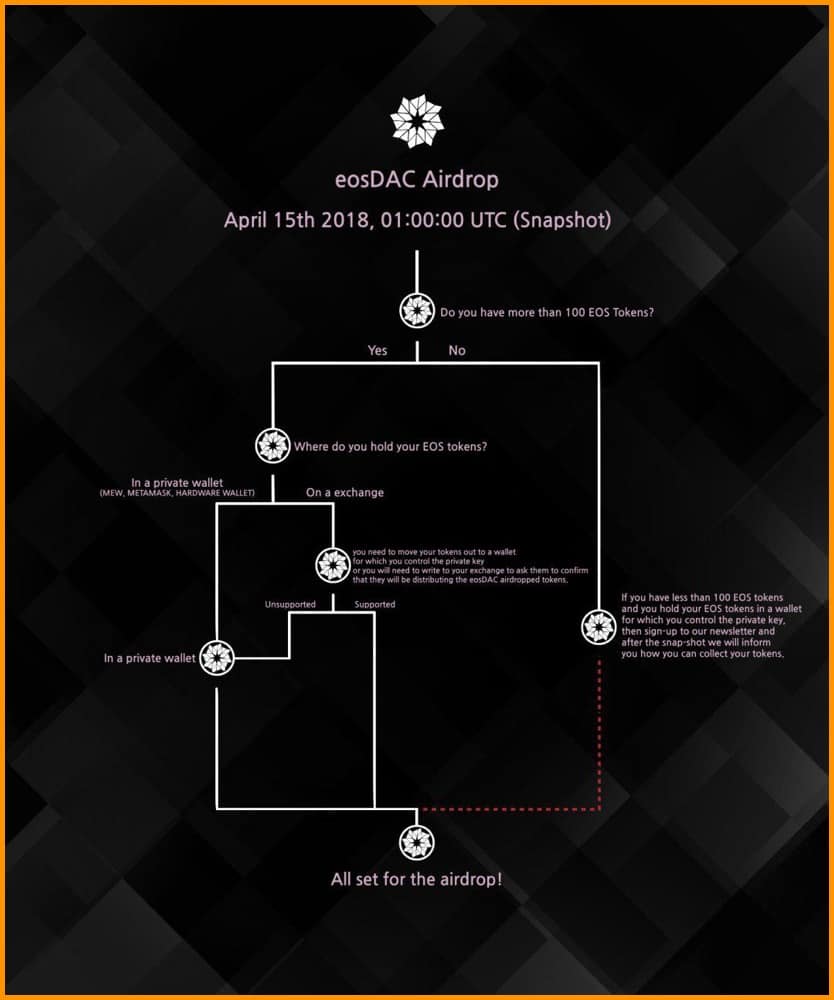 Some More FAQs Related To The eosDAC

The snapshot for the airdrop will be taken immediately at the end of EOS Token distribution period 300 – on April 15th, 2018 at 1 am UTC. There will be a number of checks and tests following this and the eosDAC tokens will be delivered following this period.

When an EOS based blockchain is started, the eosDAC launch team will decide whether to support the chain and add a block producer node (one or more block producer servers). Following this full details of how to activate your eosDAC tokens will be provided. Please note that any eosDAC not activated within 6 months of a chain launch will be lost.

This looks like an interesting development but I wonder if it was a part of the plan from the very start or is just a way to gain price appreciation.

Irrespective, the EOS token has risen in price after the news and will likely gain more in the next 24 hours.

I am also quite skeptical how much this mother DAC will have influence over the EOS ecosystem. Hopefully, it should not be a dictatorial democracy like we have in many countries.

Lastly, we will have to wait and see how this plays out in the end and how faithfully EOS blockchain is able to fulfill its promises to the decentralized world.

If you have any questions regarding the EOS airdrop, feel free to ask in the comment section below!

102 thoughts on “Free Airdrop for EOS Holders on April 15: Everything You Need To Know To Claim It!”