Is Blockchain The Solution The Music Industry Is Looking For? 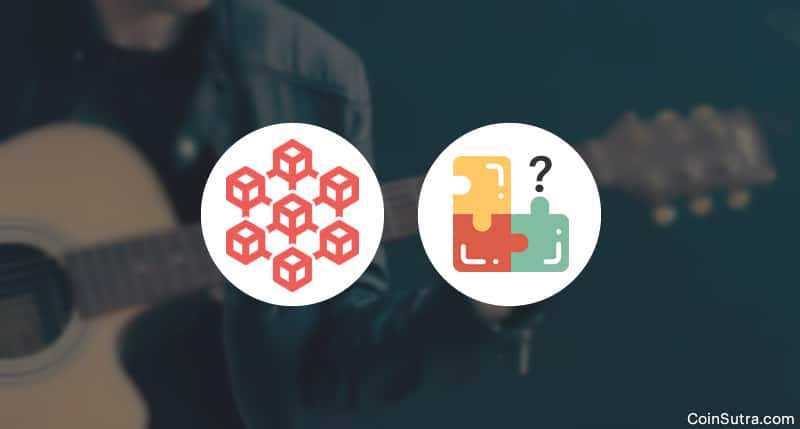 You will hear about all sorts of applications that are being developed industry-wise using the blockchain technology. But have you ever wondered why it is happening?

Well, the answer lies in the definition of the blockchain itself.

Blockchain, if put simply, is a form of a database which is not centralized.

A database that’s not centralized seems surprising to many but it is here to stay.

A blockchain is a continuously growing list of records, called blocks, which are linked and secured using cryptography. Each block typically contains a cryptographic hash of the previous block, a timestamp and transaction data. By design, a blockchain is inherently resistant to modification of the data. It is an open, distributed, decentralized ledger that can record transactions between two parties efficiently and in a verifiable and permanent way. (Wikipedia)

I have covered in detail the basics of blockchain on CoinSutra. Here is The Ultimate Guide To Understanding What A “Blockchain” Is & How It Works.

By harnessing the similar features of the blockchain tech, the music industry is also trying to fix its pain points.

Through this article, I intend to pass on the message of how blockchain is being applied to the music industry.

Blockchain For Music Industry In Making…

The music industry, due to the centralized and mediated nature of production and distribution, suffers mainly through these following issues:

Apart from that, the irony is despite digital records the artists cannot get real-time data for their production which otherwise would have helped them improve and strengthen their marketing efforts.

And you know there is a problem when such key insights aren’t available despite an industry being online & digital.

But being online or digital doesn’t solve the problem alone as the main issue is that different digital platforms or brands through which the actual distribution of music happens are like silos of information which don’t talk to each other.

For example, even if an artist sells his/her music on Song Music, Apple Music, and Google Play Music, they don’t get the actual picture of what is happening overall digitally to their product. They don’t have insights that can be conclusive. That is why, when you have a database like a blockchain it becomes easy to make conclusive insights.

And there is more:

These production and distribution houses that act as agents take a hefty amount from the earnings of the actual musical product and very less gets passed on to the actual artists.

In some scenarios, this reward has been as low as 10-20% for the artists and can take up to 2-3 years in actually reaching the artist’s bank account.

This problem can be solved with autonomous smart contracts hosted on the blockchain which pays the artists at the point of sale itself in a matter of minutes.

Some start-ups have already started doing this. (We will talk about them further in the article).

On top of that, piracy problems bring down the overall sales of the music records that results in a loss to its creator. And that’s because these labeled houses aren’t efficient enough to prevent piracy to occur.

But with blockchain-based cloud storage platforms, the problem can also be solved where the actual records are broken into many pieces and stored in a distributed way.

And the good thing is, these can be reassembled on demand upon a paid request from the consumer.

Last but not the least, the most complicated problem of rights management can also be solved by the blockchain.

And through this, royalty management and distribution amongst various entities such as composers, producers, publishers, and singer can be done in an effective way.

Parallelly, the onset of music-centered blockchain is catching up very fast and the cryptocurrency space has developed quite a few music management blockchains by now for various uses, some of which are:

Having said that, we should understand the fact that blockchain might not solve all the ills of the music industry but it is certainly a very strong alternative to fix some of the age-old friction points.

If the artists are paid well and don’t need to worry about the monetary aspect, they will be motivated to produce better content for their supporters.

And this aspect of blockchain has been recognized by quite a few artists around the world who have started launching their music on the blockchain. Some of the examples are:

It's time for a major change in the music industry! Blockchain developers, we need your help to empower artists worldwide.

That’s it from me in this article but stay tuned to CoinSutra for more blockchain and cryptocurrency related information as we are going to cover some of the good blockchain projects related to music industry very soon.

Hope you enjoyed this write-up. If you did, do share it with your friends and family.