Poloniex Vs. Bittrex: Which is Better? (Comparison)

There are multiple ways to make millions, if not billions, in the world of cryptocurrency.

One of those ways is buying altcoins and selling them for profit, if and when the price rises.

You can also make millions by day trading. Now, day trading is definitely not something I like because it causes a lot of anxiety and basically feels like gambling.

Update: The future of Poloniex doesn’t look great anymore. The Reddit is full of complaints and I would suggest you should not use Poloniex anymore and rather use any of the listed alternatives which are way popular.

I realize that my superpower is in something other than short-term trading. Holding altcoins for the long-term and selling them for profit, later on, is what I enjoy doing, and it’s also how I made a ton of money in the past year. I enjoy doing it this way because one of my strengths is an eye for detail, and I can research fast to come up with a pretty solid conclusion.

In case you’re interested, we have a Telegram channel where I share my observations and suggestions on which cryptos I think you should be investing in. You can join our channel here.

In the crypto world, the most popular method of getting altcoins is through an exchange.

Poloniex and Bittrex are two of the most popular digital currency exchanges available today.

2020 update: Binance and KuCoin are now more popular than Poloniex.

After using Changelly to exchange digital tokens during my initial trading days, I discovered Poloniex. I loved it from day one because the conversions were great, the volumes were great, and I could get started just by transferring over some bitcoins.

Later, I also discovered Bittrex, which seemed like a cleaner version of Poloniex.

So which one is better?

Bittrex vs. Poloniex: Which is Better?

The reason this Bittrex vs. Poloniex comparison is important is that a lot of us exchange Bitcoin into various different digital tokens (cryptocurrencies) through these exchanges.

Now, the wisest thing to do is transfer those tokens to a separate wallet, but if you are holding 15+ different cryptos, it’s challenging to set up 15+ separate wallets.

And both exchanges offer these wallets for free. It’s very convenient. That said, I always advise people to take their tokens off of exchanges as quickly as possible. But if you’re only holding your coins there for a short period of time, this is probably OK.

At the same time, we need to have certain features available to us in order to do the things we want to do. This includes having support for the tokens we want to trade in. Without this, we can’t even start trading.

The exchanges that we deal with the need to be well-rounded and complete solutions for our trading needs.

So without further ado, let’s get into our Bittrex vs. Poloniex review!

There was a time when I had 2.5 BTC on Poloniex. Initially, this didn’t matter much because the total value was less than $1200. Later on, when the price of 1 BTC increased to over $3,000, I started getting worried about the safety of my coins.

This is when I started researching the Poloniex team.

What really surprised me was that even though Poloniex has grown their user base exponentially in the past few years, their customer support and social media support has been at an all-time low. Apart from 1-2 members on Reddit, they don’t have contact details of anyone that you can talk to in case of downtime or some other emergency.

They are incorporated in Delaware (anyone can do that), and they don’t have any kind of public persona. In general, they just don’t seem reliable to me.

In fact, they look like a company that would pull off an exit scam whenever they wanted to. I’m not saying they will, but a brand that doesn’t have a public face doesn’t make me want to trust them with my money.

Bittrex founding members are on Twitter, and they constantly update us via tweets when any major event is happening.

This kind of open communication and accountability is a major plus when it comes to me trusting them with my money.

I believe this single reason alone is good enough for most people to make a decision as to which exchange to pick. In terms of things I value in an online exchange, trustability is at the top of the list.

You can learn more about the Bittrex team here.

In terms of features, Poloniex is better, but only when you are using some of the advanced features like margin lending and margin trading. Margin lending/trading is when someone lends their balance to someone else and then the borrower pays interest. They offer this feature for 12 coins.

If you’re looking to earn a pretty handsome amount of money, margin lending and trading are two really attractive options. But of course, do your due diligence and always be cautious when doing any kind of trading.

Poloniex also has two-factor authentication, which is pretty standard nowadays, but always a nice touch.

They use a maker-taker fee schedule:

And their user interface is really nice, simple, and clean. It’s very easy to use and works perfectly.

Due to the margin lending/trading feature, I think Poloniex is a little better than Bittrex in the features department. 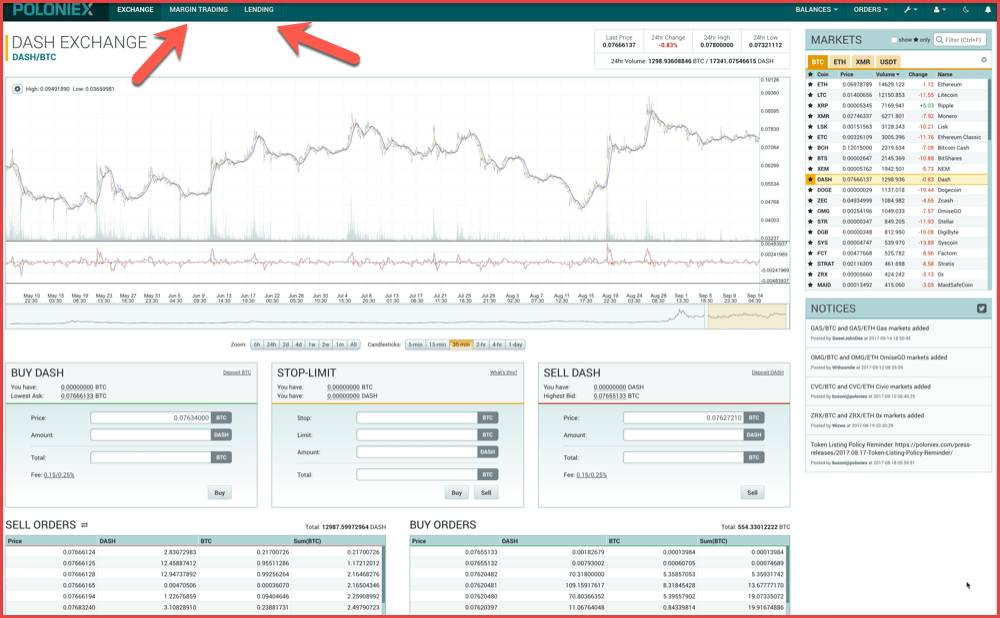 Bittrex: Loser (but not by much)

Personally, I really like the interface of Bittrex, and I find it to be more intuitive than Poloniex.

I like the clean white look, and the fact that they show prices in USD is really helpful for me because Bitcoin prices tend to fluctuate wildly.

They also have two-factor authentication, and use something called an “elastic multi-stage wallet strategy” which allows them to store almost 90% of the exchange’s coins offline. So even if the site gets hacked, the coins are still secure.

Bittrex has a flat .25% fee, and charges withdrawal fees according to the specific coin’s network policy.

But unfortunately, unlike Poloniex, they don’t have margin lending/trading, which I feel is a pretty awesome feature to have, and gives Poloniex a slight edge here. 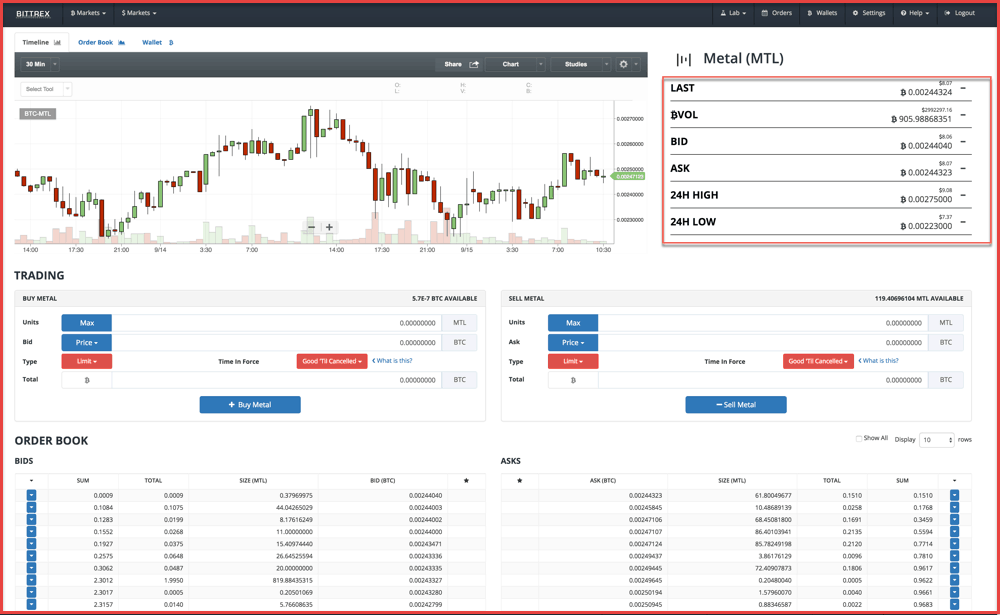 Both Poloniex and Bittrex have a lot of tokens. As more and more tokens come out, both exchanges grab them up pretty quickly. Sometimes Bittrex grabs them first, and sometimes Poloniex gets them first.

This is one reason why you need to have an account on both exchanges.

In fact, you should get an account on a lot of exchanges because there’s no one exchange which has all the tokens. For example, Bitfinex is the only major exchange to carry IOTA, and some of the Chinese exchanges are the only places to get some of the up and coming Chinese tokens.

In general, the trading volumes on both Bittrex and Poloniex are massive, and there’s no real way to compare them. They both have all the major coins, and they both are quick to add support for the new ones that look the most promising.

There’s no significant difference here; both Poloniex and Bittrex are two of the best exchanges for getting access to a majority of cryptocurrencies out there today.

Bittrex vs. Poloniex: Who’s the winner?

Bittrex and Poloniex are two of the leading digital currency exchanges in the world. Bittrex came a little late to the game, but it’s been gaining a significant amount of popularity over time. Check out this Google Trends chart: 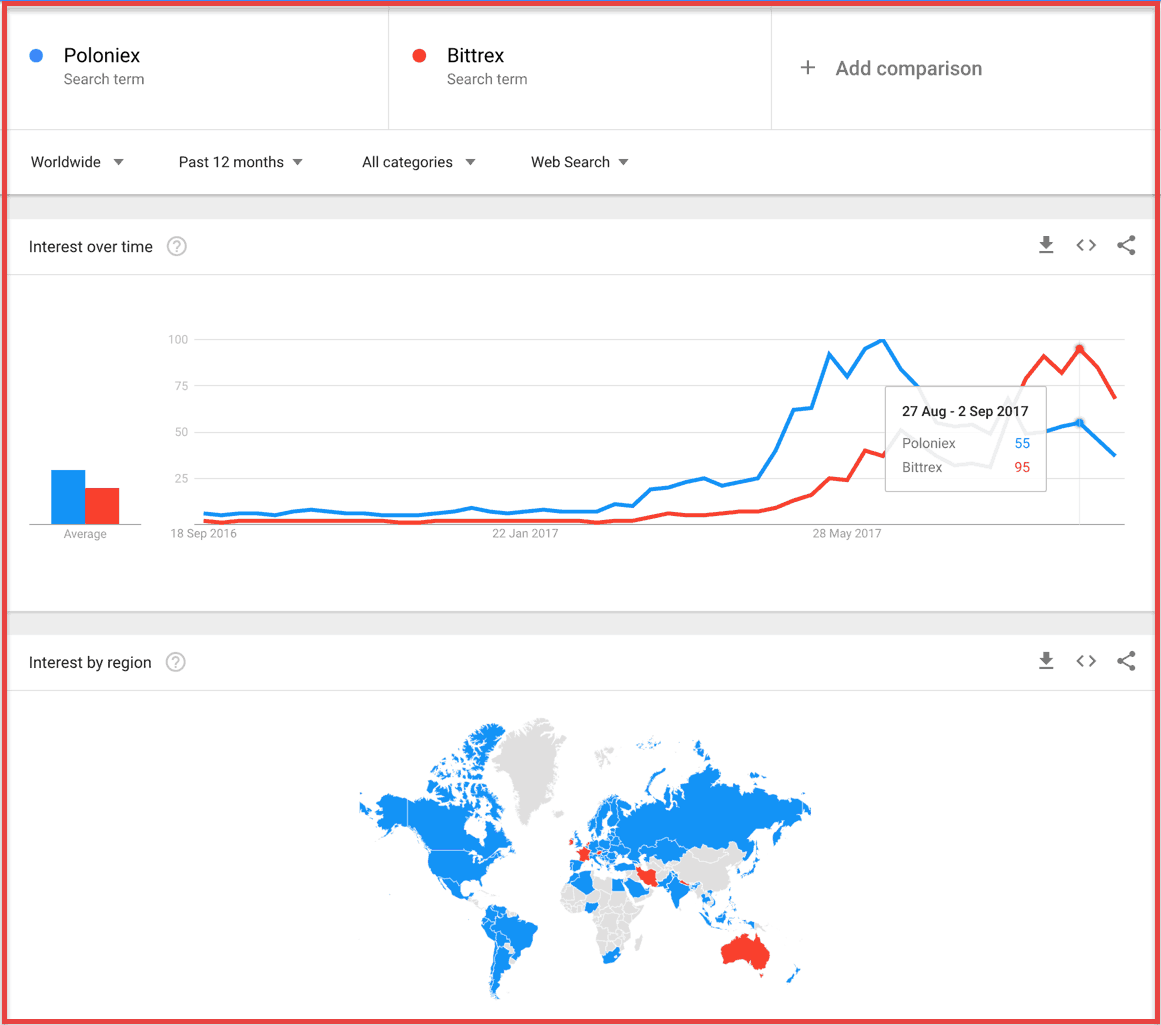 One thing that I feel both exchanges are missing right now is a mobile app. Having a mobile app will help many users like me who are always on the move. Bittrex says it’s working on one, and Poloniex has not mentioned anything about it.

I think overall, simply due to the fact that Bittrex is more open and transparent, I would give them the edge. I feel safer leaving my coins in Bittrex, and I generally feel more comfortable trading on their platform.

That said, Poloniex is a great exchange with a massive amount of trading volume. It’s tough to completely rule them out just because their team is less transparent.

I currently trade on both platforms, and I encourage you to do the same.

So try out both of them and then come back here to let me know your review! Which exchange do you like better? I’ll be waiting for you in the comments!

Note: If you are holding any amount of coins and are planning on holding onto those coins for any length of time, you should definitely put those coins into a wallet. NEVER store your coins on ANY exchange for a long period of time.

Consider getting a wallet like the Ledger Nano X (list of Ledger supported cryptos), or Exodus which support a lot of different cryptos.

15 thoughts on “Poloniex Vs. Bittrex: Which is Better? (Comparison)”