Will We Really Lose Bitcoin In The SegWit2x Fork?

CoinSutra » Bitcoin » Will We Really Lose Bitcoin In The SegWit2x Fork? 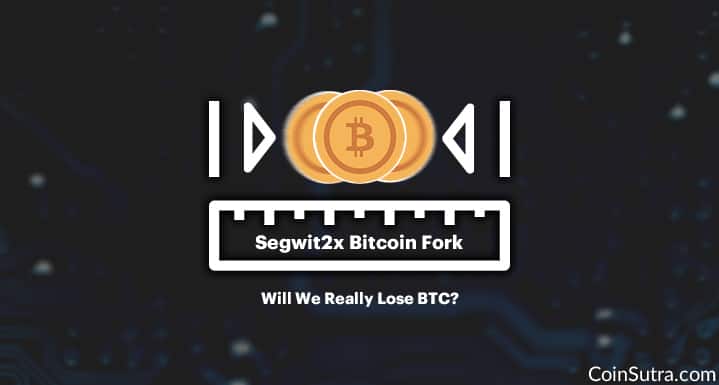 CoinSutra welcomes you to another Bitcoin hard fork mess!

And when I say “mess”, I mean it more than ever.

In a recently concluded Bitcoin hard fork (i.e Bitcoin Cash), we witnessed the ebbs and flows of being a Bitcoin investor.

And now, again, the Bitcoin ecosystem, including every type of entity connected with it, is being tested because we have another Bitcoin hard fork scheduled for this November.

I know some of you might wonder why this is happening because Bitcoin has already scaled, activated SegWit, and Bitcoin Cash supporters have already parted their ways with bigger block sizes.

So why is this happening???

Well, my answer is simply that the Bitcoin scaling debate is not over yet!

For those of you who have been reading CoinSutra diligently, you will know about the unconcluded story of the New York Agreement.

And now, this unconcluded story is about to reach its climax.

For the newcomers, here’s what happened…

What Is NYA or SegWit2x?

NYA (aka New York Agreement or aka SegWit2x) is a Bitcoin scaling solution that was signed and agreed to by a large number of miners, developers, and investors in Consensus 2017.

SegWit2X is a fancy derivative name given to a combo of scaling solutions (i.e SegWit and 2MB block size increase). It simply means implementing SegWit first, and then within 3 months of SegWit activation, it aims at implementing a 2MB block size for the Bitcoin network.

Why Is This Fork Happening?

Now the present mess is about the implementation of the 2MB block size (which is happening in mid-November 2017).

But as I have described in my Bitcoin Improvement Proposal article, 2MB blocks will be implemented only when core developers and other players support this idea.

But it doesn’t look like many of them will be supporting it, and so we are having yet another hard fork lingering over Bitcoin.

Consider reading these “fork” posts to know the complete history of this event:

When Is This Fork Happening?

The exact time is not known yet, but it is scheduled to go live from block height 494784.

And according to Blockchain.info at the time of this writing, the Bitcoin network is currently sitting at 489179 block height. So you can see that we are only a few thousand blocks away from the SegWit2x hard fork.

Are Your Coin Holdings Doubling?

If this fork happens, then everyone who was holding Bitcoin before the fork will have an equivalent number of these new SegWit2x coins.

Note: This doesn’t mean that your value of coins will double. Those who were present at the Bitcoin Cash hard fork ceremony will surely understand this.

But there is a problem…!

The problem is it is really going to be very tricky and risky to claim our SegWit2x-version bitcoins. This accessibility problem will emerge due to replay attack susceptibility on both chains. (Read in detail about replay attacks.)

This is so because the SegWit2x supporters and a SegWit2x developer (Jeff Garzik) have clearly stated that SegWit2x is not an altcoin, and it will be a Bitcoin upgrade.

For the uninitiated, replay protection is a technical update that stops the same transaction from being broadcast on both chains. (Read in detail about replay attacks).

Due to this, SegWit2x is being highly criticized by legacy Bitcoin supporters because it is a kind of open attack on Bitcoin and its users.

What Is This Opt-In Replay Protection And Why Should You Know About It?

This was proposed by Jeff Garzik, the developer of SegWit2x. It has been highly criticized because it will put users’ funds at risk.

As a Bitcoin HODLer, you should know about this because if you do a transaction on either of the chains without “opting in”, then your coins on the other chain will be at risk.

Anyone will be able to pick up that transaction and “replay” it onto the other chain, and you will lose those coins.

Who Is Supporting SegWit2x?

But as of now, at the time of writing this article (mid-October 2017), we’re not so sure that all of these groups are still supporting it.

Out of these companies, Coinbase and Bitfinex have come out and openly stated that they will be supporting both chains for their users, but also appealed to users to wait until the dust settles.

Let’s also not ignore some notable Bitcoin pundits (like Roger Ver) who claim that SegWit2x will be far more successful in gaining the majority of hash power and are betting millions on its success.

What The Hell About The Bitcoin Gold Fork?

Bitcoin Gold (BTG) is an another hard fork of Bitcoin scheduled for 25th October 2017.

You need not worry as it is unrelated to SegWit2x and has claimed to have replay protection in place.

Also, I have done a separate post on the Bitcoin Gold fork for CoinSutra readers, so just sit tight and follow this guide.

The Conclusion (What You Need To Do)

I want to conclude by stating the same thing that I have stated many times:

But now that we have this opt-in replay protection thing, here is some other advice to avoid losing your funds:

That’s all from my side in this article. I will be updating this article time and again with the latest developments on SegWit2x, so stay tuned to CoinSutra.

Now its time to hear from you: What do you think about SgWit2x? What will you do with your SegWit2x coins, if you get them? Waiting for your comments!!

Note: Everything that I said above is irrelevant and useless now because the Segwit2X fork now stands cancelled. I have published another post on it where you will learn everything that you should know.[Must Read]: Bitcoin’s Hard Fork SegWit2x Cancelled

It is good that this fork is now called off but this has led a sudden spike in interest of users in Bitcoin Cash (BCH), which was formed in August. It currently trading well above $1000 per unit and it is largely due to Roger Ver’s promotion of Bitcoin Cash on the Bitcoin.com.

He has also several times claimed the Bitcoin Cash is the real Bitcoin that Satoshi Nakamoto wanted to create.

The Bitcoin Cash price is certainly taking off after the Segwit2x collapse and it is quite evident from these memes as well as propaganda by Roger Ver.

But we don’t believe in it yet and want to make the new users aware that Bitcoin is Bitcoin and not to get mislead also Bitcoin is not owned by anyone neither-Roger Ver.

87 thoughts on “Will We Really Lose Bitcoin In The SegWit2x Fork?”