This is my fourth Bitcoin hard fork post in just a span of 4 months.

So I will just get straight to the point because I think by now we all have become very used to, to such forks, because one hard fork is happening again.

But still, for the uninitiated I am sharing few links below that will help you in your learning curve just in case if you don’t know about forks.

Now coming straight to the hard fork drama so that we can address some of the basic questions that usually arise when a fork is done.

So I will cover these following important points in this write-up.

1. What is this fork called and when is it happening? 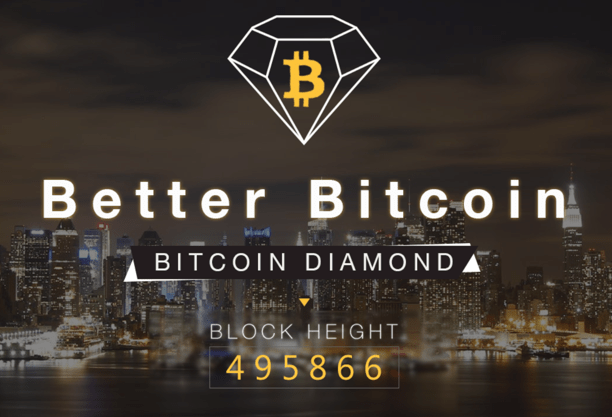 This brand new Bitcoin hard fork is called Bitcoin Diamond and is dubbed as BCD.

This new Bitcoin hard fork is happening tomorrow sometime i.e. (24th November 2017) at block height 495866 according to their official website.

It is a friendly fork meaning that it is not being done to compete with original Bitcoin but it is being done for reasons that I will explain further in this post.

Their official definition and explanation of Bitcoin Diamond:-

Bitcoin Diamond (BCD) is a fork of Bitcoin that occurs at the predetermined height of block 495866 and therewith a new chain will be generated as the BCD. Bitcoin Diamond miners will begin creating blocks with a new proof-of-work algorithm, and will consecutively develop and enhance the protection for account transfer and privacy based on original features of BTC. This will cause a bifurcation of the Bitcoin blockchain. The original Bitcoin blockchain will continue unaltered, but a new branch of the blockchain will split off from the original chain. It shares the same transaction history with Bitcoin until it starts branching and coming into a unique block from which it diverges. As a result of this process, a new cryptocurrency was created which we call “Bitcoin Diamond”.

2. Why is this fork happening and who is doing it?

As per their official website, this fork is done by two team members who have pseudonyms. They are known as EVEY and 007 who are reportedly miners according to newsbtc.com

They are forking Bitcoin because they don’t see the actual Bitcoin scaling and serving the needs of growing users.

Namely, they have stated because of following problems they are forking BTC into Bitcoin Diamond.

So they have decided to change all this by making a better version of Bitcoin, with better features.

3. How will Bitcoin Diamond solve these problems?

Bitcoin Diamond will solve these problems by doing following things:-

4. Total supply of coins and their economics 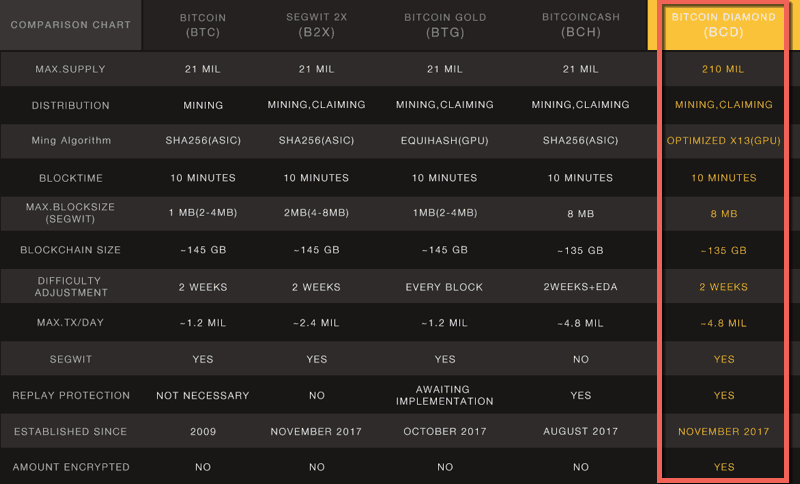 The total amount of BCD will be 210 million i.e ten times more than the actual BTC. They have said that they will not increase the supply more than this.

Out of this total supply 170 million BCD, will be presented/air-dropped/entitled to the Bitcoin holders for the long-term Bitcoin support in1BTC: 10BCD ratio.

The rest 40 million will be automatically transferred into the community rewards pool as tributes and mining.

This part is a quite questionable one because there is not much clarity about it yet and also Bitcoin Diamond has listed quite a few wallets and exchanges supporting them with this note which reads:-

Disclaimer: the Bitcoin Diamond Organization (btcd.io) cannot take responsibility for third-party providers, such as the listed exchanges, wallets, sites, and pools. All links hosted on our domain are by community members and third parties and by clicking on any of the listed links you are accepting the risks of using the third party domain and taking responsibility for any losses, damage or other issues using the said domain. Crypto-currencies are inherently risky and investors and users must remain vigilant.

But still, I will list those exchanges and wallet services here as well as keep updating this section as and when I keep getting more concrete information on them.

There are some more exchanges but we really don’t trust them so as of now you can trade Bitcoin Diamond futures here until the late December when the main net launches.

In late December 2017, Mainnet and wallet will be published, code open source in @github and would be mineable, stay tuned for more updates. pic.twitter.com/gUILGpcQqh

Note: We don’t recommend you to use the above-listed wallets because we don’t trust BCD yet and have not reviewed these wallets. Also, Ledger doesn’t support BCD as of now.

Not really, why does anybody actually need to worry because they are just an altcoin!

Moreover, you will be getting BCD in 1 BTC: 10 BCD ratio which is a free money and free money is always good.

Also, they have stated on their official website that they have made changes in BCD trading format that will prevent replay attacks.

So if I just go by what the BCD people are saying then we should not worry because replay protection is there.

7. What do you need to do to benefit from it?

Now the million dollar question what do you need to do to claim your free BCD and enjoy this benefit. (We will publish how to claim your BCD as soon as the fork happens)

But for now we suggest you take care of the following things for maximum security and benefit during this fork:

My final thoughts on the Bitcoin Diamond fork

After the successful fork of Bitcoin Cash and Bitcoin Gold, it will be highly underestimating to do away this fork because they are doing something unique with Bitcoin fork, in a different way.

Also, I think they will be a 100% mined coins because they are moving 40 million for other purpose or else I can be wrong because maybe they launch themselves with reduced ratio or denominations which is still not very clear from them yet officially.

But surely if this fork happens it will survive and will have marketplace because of the following reasons that I think:-

These all are very low entry barriers for miners, developers, users and traders so that’s why I think this will survive because pretty a coin needs these many things only to survive. And as per their released roadmap, they look serious but the roadmap doesn’t look so impressive.

Yet I can be wrong so let’s meet again and see what happens at the other end of block 495866 i.e. after the fork.

Update 1: BCD has forked and if you are trying to claim it now in your wallet then you won’t be able to do so because the blockchain is still not live. It will be live until the late December 2017. But if you wish to buy/sell BCD futures then I have listed some of the exchanges above. Also, soon CoinSutra will be coming up with how to claim BCD from wallets and the list of exchanges where you can actually sell your BCD from your wallets when the blockchain goes live.

Update 2: Scam wallets are out for Bitcoin Diamond that are trying to get hold of your BTC seed keys/words so be aware of them and don’t put your keys/seed unless you are very sure about them. Here is our alert to the coinsutra.community.

🚫 https://t.co/sjZNHAfJfg🚫 Scam Alert. Don't use this wallet to claim your Bitcoin Diamond it is a scam to steal your bitcoins.

Update 3: There will be two more Bitcoin forks in the near future very soon. We are studying them and will be back with as much as possible info on them so that our community can safely benefit from it.