A Beginner’s Guide To AirSwap, The Crypto Exchange Of The Future

CoinSutra » Cryptocurrency » A Beginner’s Guide To AirSwap, The Crypto Exchange Of The Future 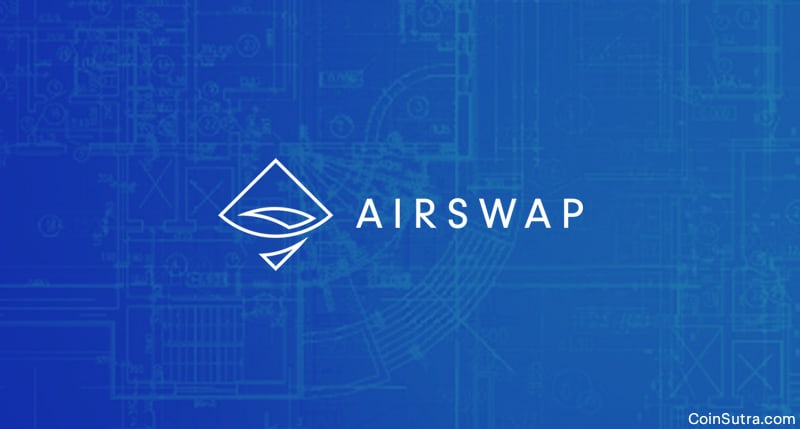 Have you wondered why it is raining decentralized exchanges (DEXs)?

Well, it is because they are the savior of the crypto economy as well as the future if cryptos have to thrive. I have elaborated on the same in my previous write-up: Why Decentralized Exchanges Are The Future Of Cryptocurrencies.

Decentralized exchanges are going to become much more relevant with time, especially if government regulations becoming more stringent towards cryptos around the world.

Hence, it is apt to discuss another upcoming decentralized exchange – AirSwap. In this fundamental analysis of AirSwap (AST), we will discuss:

AirSwap is a decentralized exchange for ERC20 tokens and it achieves that by implementing Swap protocol, a peer-to-peer protocol for exchanging Ethereum tokens.

Unlike centralized exchanges, AirSwap doesn’t use order books that inherently has many drawbacks on the blockchain such as latency, scalability and front-running issues among others.

AirSwap mixes best of both the worlds, i.e. off-chain and on-chain, to help intended parties negotiate for a trade in a fair, secure and private way. AirSwap uses a strong alternative in peer-to-peer token trading – off-chain negotiation and on-chain settlement through Swap protocol.

But have you ever wondered why just peer-to-peer?

Well, the answer is in these three key points:

But it is not as simple as it looks on the outside, as there are many elements that work in tandem to achieve a seamless experience for the users and this is what we will discuss in the next part.

AirSwap is based on these 4 key components (Source: AirSwap Whitepaper):

You can think of peer protocol as a messaging platform where counterparties can talk and negotiate in a quick, fair, and private manner. This happens off-chain. 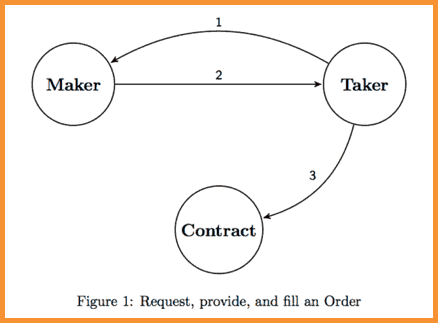 An indexer is also an off-chain service that first aggregates ‘intent to trade’ from both the Maker and Taker sides and then matches peers based on it. Once the Taker has found a Maker with whom they would like to trade, they proceed to negotiate using the Peer Protocol as explained in the first point. Once an agreement is reached between the Maker and Taker, the order is filled on the smart contract.

See the interaction of Maker, Taker, and Indexer is illustrated in the following diagram. 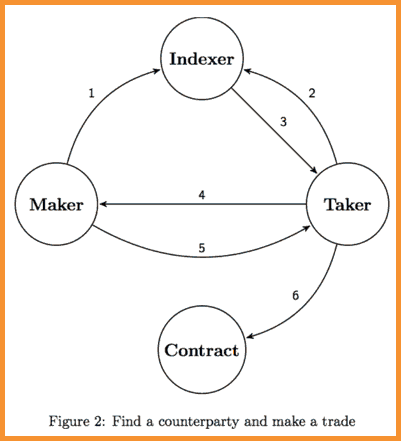 An Oracle is an off-chain service that provides pricing information to Makers and Takers. When pricing an order prior to delivering it to a Taker, a Maker may ask the Oracle for a fair price suggestion. Likewise, having received an order, a Taker may ask the Oracle to check the price on the order to verify that it’s fair.

The Oracle provides this pricing information to help both the Maker and the Taker make more educated pricing decisions and also for a smooth process of trade negotiation.

A very similar interaction happens between Taker and Oracle when the Taker receives an order.

Ethereum smart contacts are conditional contracts written in solidity to fill or cancel orders in AirSwap ecosystem. Read more here: What Are Smart Contracts in Relation To Ethereum?

Note: This AST token is an ERC20 token and is not a security token or a dividend paying token in any way.

The AirSwap team is quite promising and is backed by ConsenSys.

One of the co-founders is a veteran algo-trader while the other is product designer. It also boasts of an impressive advisory board. (See full team here) 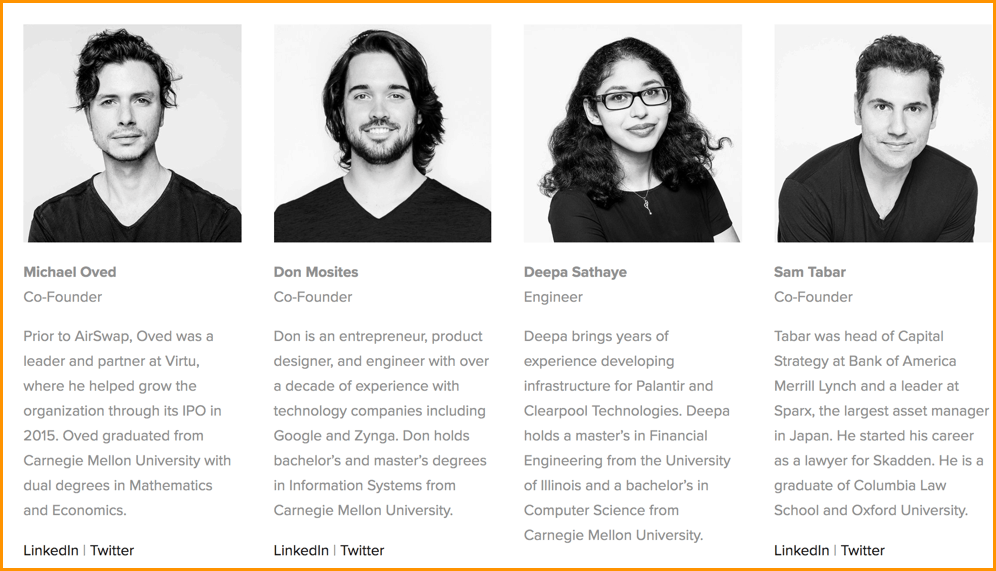 According to CoinMarketCap, the total circulating supply is 150,000,000 AST, and the current price of each unit is $0.08 that values it at approximately $12 million (at the time of writing this article).

Where To Buy AirSwap Token (aka AST)?

Here are some of the exchanges where you can buy AST tokens:

Note: Buying AST in fiat currencies such as USD, EUR, or GBP is not possible now.

AST is an ERC20 token so you have plenty of options for storing your AST tokens safely. Some of these options have been listed below and will help you keep your AST safe.

If you see at a glance, AirSwap is positioned in a much stronger position from technical/market maker point of view when you compare it with other exchanges. Here is a quick AirSwap vs others: 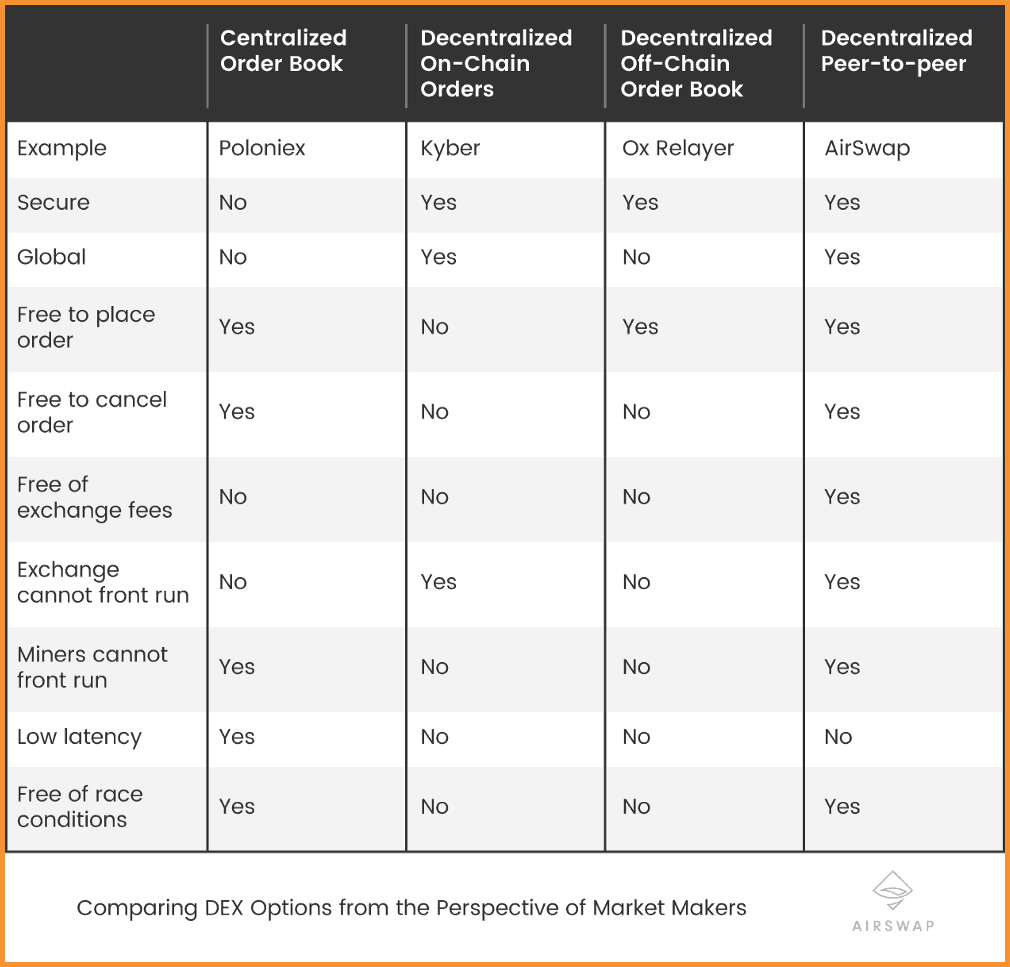 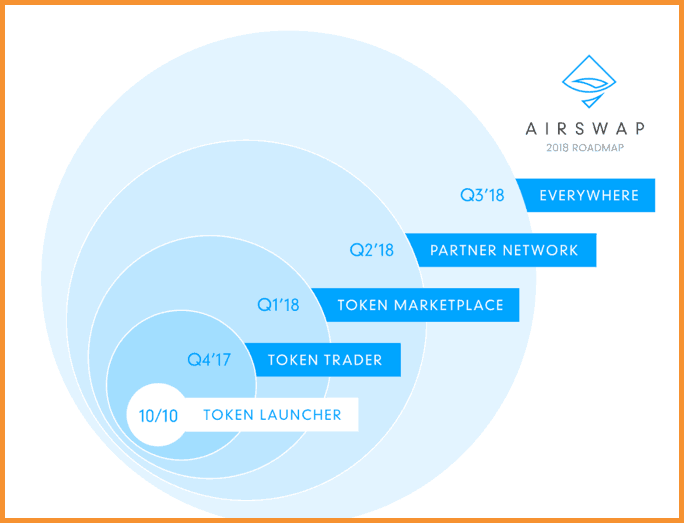 This allows users to trade AST for ETH and vice-versa, without any trusted third party, without any fees, and without giving up any of their personal information. But more token pairs will be added soon as per the roadmap of 2018 under their partner network programme.

Also, in this mobile-driven economy, a mobile app for AirSwap DEX is in development and will soon reach beta.

Lastly, I see AirSwap going places, for they can provide tools and services to fuel this tokenization of the world by blockchain based tokens because their team has what it takes to reach those levels.

And with several iterations and ease of use, AirSwap can be a tough competitor for other exchanges in ERC20 exchange niche because it is quick and peer to peer, which suits humans needs quite well.

If there is any other token/coin that you want me to cover, please let me know in the comment section below and I will have a look at it.

Some official links that will help you stay updated on AirSwap project:

5 thoughts on “A Beginner’s Guide To AirSwap, The Crypto Exchange Of The Future”